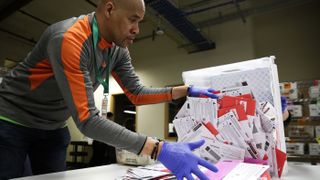 As the 2020 presidential election approaches, and the coronavirus continues to circulate throughout the United States, President Donald Trump has begun to decry mail-in voting, calling it a “scam” and predicting on Twitter that the election would be a “fraudulent mess.”

Scientific literature on mail-in voting shows it has very low rates of fraud, however — and Trump might want to consider that there’s no evidence he’ll be at a disadvantage if a high proportion of people mail in their votes. Research on previous elections suggests that vote-by-mail doesn’t lead to a major turnout bonus for either Democrats or Republicans. The politicization around mail-in voting is based upon mistaken assumptions, said Adam Berinsky, a political scientist and director of the Political Experiments Research Lab at MIT.

Turning out the vote — by mail

Vote-by-mail has been an option for Americans since the Civil War, when soldiers were able to vote absentee in their home state elections. There is no firm differentiation between absentee voting and voting-by-mail, but Trump (who has called absentee voting “good”) seems to make the distinction between states that allow voters to request an absentee ballot (all 50, though some require a specific reason why the voter can’t come to the polls in-person) and states that run universal vote-by-mail elections (Colorado, Hawaii, Oregon, Washington and Utah). In universal vote-by-mail elections, all registered voters are mailed a ballot without having to request one. Typically, the polls in those states are also open for those who prefer to vote in-person.

In 2001, Berinsky spearheaded a study in Oregon, the pioneer of mail-in voting in the United States. Oregon held its first universal vote-by-mail primary election in 1995, and its first mail-in general election in 1996. Using data from phone surveys of voters and state records of their past voting histories, Berinsky and his colleagues showed that voting by mail increased turnout by about 6% over time. But it did so not by luring new voters into the electorate. Instead, it increased turnout over time mostly by encouraging previous voters to keep voting in later elections.

Thus, the researchers reported in the journal Public Opinion Quarterly, there was no real difference in the demographics, or party preferences, of those who voted: Voting-by-mail tended to cement voting by older voters, the well-educated and those with a high interest in campaign activity, the same people who usually vote anyway.

More recent research suggests these findings still hold. Researchers from the Stanford University Institute for Economic Policy Research pulled data from 1996 to 2018 in California, Utah and Washington, all states that rolled out universal vote-by-mail elections county by county over time. Studying these slow rollouts allowed the researchers to compare in-person voting and universal mail-in voting in the exact same state races, helping control for things like competitiveness of the race and what offices people were voting for, they reported June 23 in the journal Proceedings of the National Academy of Sciences.

This method showed an increase in turnout by 2% and no change in the share of voters by partisan affiliation. The findings are consistent with other research on universal mail-in voting, Thompson told Live Science, which typically shows a “modest” increase in turnout. For instance, a study of Washington’s vote-by-mail elections published in Political Science Research and Methods in June 2013 found voter turnout increased by between 2% and 4%. In contrast to the earlier Oregon study, though, this turnout increase was due to lower-participating voters who began voting more often, instead of frequent voters getting an extra boost.

Thompson and his colleagues are working on preliminary research on vote-by-mail in Texas’ July primary runoff election, perhaps one of the first looks at how vote-by-mail works in the time of a pandemic. In Texas, anyone over 65 can request an absentee ballot without an excuse, while those 64 or younger can only get one if they meet specific criteria. By comparing voting rates of 65-year-olds and 64-year-olds, who are at similar COVID-19 risk, Thompson and his team could look at the effect of a vote-by-mail option on turnout. They found no difference in turnout for 64- and 65-year-olds compared with normal years. The 65-year-olds shifted to vote-by-mail at much higher levels than usual, but the 64-year-olds headed to the polls in-person like usual, Thompson said. Thus, vote-by-mail seemed to be a good pandemic option that people want to take advantage of, Thompson said, but not one that fundamentally shifts election results.

“You can think of the effects of these policies in 2020 as giving people an opportunity to vote safely without dramatically changing the contours of the election,” he said, while cautioning that people who vote in primary runoffs may not behave in exactly the same way as those who vote in general elections.

The question of fraud

Voting by mail might seem prone to fraud, given that there are no poll workers to check identification. But the evidence for voter fraud is slim.

There have been a few high-profile cases of mail-in vote fraud. In 2019, an election result for a Congressional seat in North Carolina was overturned after officials learned that Republican operatives had organized a scheme to collect empty mail-in ballots and fill them in for the Republican candidate. According to the Heritage Foundation’s voter fraud database, election officials became suspicious when 61% of mail-in ballots were marked for the Republican in a district in which 16% of voters were registered as Republicans.

There was also a case of fraud involving mail-in ballots in May in Paterson, New Jersey, involving a city council race. In that case, a councilman and two others have been charged with improperly collecting and delivering ballots. Hundreds of mail-in ballots were also left uncounted in that election, according to NJ.com.

However, the overall rate of mail-in voter fraud appears to be low. The Heritage Foundation records 1,290 convicted cases or confirmed findings of voter fraud stretching back to the early 1980s. Of these, only 208 involve improper use of an absentee ballot — the rest involve in-person voting. A Brookings Institution analysis of the Heritage database found that confirmed voter fraud was also limited in the states that offer universal vote-by-mail. The analysis looked at duplicate voting and improper use of an absentee ballot, both of which would be easier under vote-by-mail. Colorado had eight of these types of fraud via the mail-in system between 2005 and 2018 (vote-by-mail was enacted in 2013 in the state). Oregon had nine cases, and Washington seven. Hawaii and Utah had none. In total, all five states reported only 29 attempted fraudulent votes of any kind by mail.

Of course, these numbers included only fraud that was caught and confirmed. Fortunately, there is little evidence that widespread fraud is slipping under the radar, either, whether by mail or in-person, Thompson said. In one study published in May 2020 in American Political Science Review, researchers looked at double-voting, or cases where a person votes twice, and found that it was theoretically possible that at most, one in 4,000 of votes in the 2012 presidential election were double votes. However, a “significant portion, if not all” of these double-votes were actually probably clerical errors, the authors wrote. True double votes are not numerous enough to threaten election integrity, they wrote.

“When they actually go and investigate this directly by gathering data on social security numbers on these individuals, they find that almost all of these people that are accused of double voting are actually two different people with the same name and birthdate,” Thompson said.

There have also been systematic attempts by both the George W. Bush and Trump administrations to ferret out voter fraud, Berinsky said. Neither found any major incidents.

That doesn’t mean that holding an election during a pandemic will be smooth or simple. Compared with previous elections, this one might see a difference in who wants to vote by mail or vote in-person due to the coronavirus. An Economist/YouGov poll released Aug. 7 found that Biden voters are more likely than Trump voters to want to vote by mail, with 59% of Biden supporters saying they expect to vote by mail and 61% of Trump supporters saying they want to vote in person. And a study undergoing final revisions before publication in a peer-reviewed journal finds that women are more likely than men to support easily-accessible absentee voting.

“Our article suggests women are much more concerned about the spread of COVID, so that leads to differences,” said Gabriel Sanchez, a political scientist at the University of New Mexico, and one of the authors of that research.

Given the lack of a funding boost for the U.S. Post Office and the rapid switch to more mail-in voting for many states, the logistics of the 2020 election could be challenging, Sanchez said. One major issue he and his team are studying is the accessibility of ballot drop-off boxes, particularly in rural areas and on or near tribal lands. Ballot-drop boxes are concentrated in urban areas in New Mexico and Nevada, Sanchez told Live Science, meaning many rural residents have to drive long distances to turn in their ballots. That’s difficult for those who don’t have cars and for tribal members who live on reservations, many of which have instituted checkpoints and curfews to slow the spread of coronavirus.

States also need to scramble to put procedures in place for allowing voters to track their ballot and ensure that it is received. They’ll also need ways to “cure” ballots, or chase down voters whose mail-in ballots otherwise wouldn’t be counted due to a mismatched signature or stray markings. Sanchez and his team have found that New Mexico law appears to allow the U.S. Secretary of State leeway to implement a curing system without going through the legal system, Sanchez said, and they alerted the state government to that opportunity.

“We’re strongly in favor of more transparency, the curing process, providing voters with an opportunity to know that their vote was actually counted and challenging it if the state says it was not,” Sanchez said. “Good policy would be to give voters an opportunity to rectify this.”

Are conservatives more afraid of threats than liberals? Political psychologists have long found evidence that people on the right are more sensitive to scary stuff, on average, than people on the left, a basic psychological difference thought to drive some political disagreements between the two groups.

The Republican pollster Frank Luntz warned on Twitter and elsewhere the other day that if preelection polls in this year’s presidential race are embarrassingly wrong again, “then the polling industry is done.”

The Republican and Democratic parties of the United States didn’t always stand for what they do today.