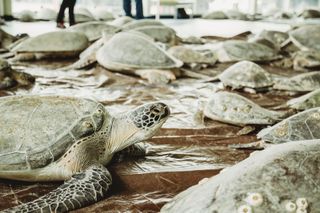 Thousands of sea turtles were cold stunned when temperatures plunged in the Gulf of Mexico this week. Nearly 5,000 of the turtles (shown here) were rescued by a small army of volunteers and “dry-docked” on the floor of both Sea Turtle, Inc.’s rehabilitation facility and the South Padre Island Convention Centre.
(Image credit: Sanjuana Zavala/Sea Turtle, Inc)

This week, thousands of sea turtles were paralyzed in the frigid waters along the Texas coastline during the unprecedented winter storm that swept across the country. In response, a small army of volunteers, many of them without power and running water, sprang into action to rescue these endangered creatures.

So what caused these sea turtles to freeze up?

As temperatures plunged across much of the U. S., the typically warm waters of the Gulf of Mexico fell, too. For sea turtles, such drops can be very risky. As water temperatures fall below 50 degrees Fahrenheit (10 degrees Celsius), the turtles’ heartbeats slow down, effectively paralyzing them. Cold-stunned turtles lose their ability to swim and float to the surface. Such cold-stunned sea turtles are at risk from predators, boat strikes and even drowning, according to the National Oceanic and Atmospheric Association.

The animal kingdom is a fascinating, beautiful and complex world, but it faces an uncertain future. In the past few years, we’ve seen Japan resume whaling and scientists warn that the next decade could prove pivotal for the Earth’s environment and its inhabitants. This annual explores some of the threats faced by 25 of the world’s most endangered creatures and meets the animals that owe their continued existence to the vital Endangered Species Act of 1973. View Deal

This is the largest cold-stunning event to occur in the U.S. since NOAA began keeping records on these events, Donna Shaver, coordinator of the Sea Turtle Stranding and Salvage Network, told National Geographic.

As of Friday (Feb. 19), nearly 7,000 green (Chelonia mydas), loggerhead (Caretta caretta) and Kemp’s Ridley sea turtles (Lepidochelys kempii) had been rescued along the Texas coastline. Roughly 5,000 of those rescues occurred along the southernmost tip of that coastline near South Padre Island. All three species are listed as either threatened or endangered by the U.S. Fish and Wildlife Service.

“The turtles were surprised by the cold just like everyone else,” Joseph Pechmann, a herpetologist with Western Carolina University, told Live Science.

Turtles typically cope with dropping temperatures by moving to warmer water. However, many turtles in this region live there year-round because of the typically mild climate; the temperature simply plunged too quickly for them to react.

To save these imperiled creatures, an impromptu navy composed of both private boats and Texas game warden vessels, primarily organized by the nonprofit organization Sea Turtle, Inc, spent the week scooping the chilly, immobilized reptiles from the water, while other volunteers combed the beaches for turtles that had washed ashore.

This is all during a winter storm that left many humans without heat, power and running water.

But the real challenge wasn’t rescuing the turtles; it was keeping such a huge number of them warm on land. Right now, just under 5,000 sea turtles are “dry-docked” on the floor of both Sea Turtle, Inc.’s rehabilitation facility and the South Padre Island Convention Center, according to Texas Monthly. There, the paralyzed turtles are being kept warm on tarps inside facilities powered by donated generators. Photos show thousands of turtles arrayed over a space the size of a football field, looking like pebbles on a dry creek bed. Wendy Knight, the director of Sea Turtle, Inc., told NPR that the turtles cannot be released until water temperatures reach at least 55 F (13 C).

“It’s a huge, huge community effort,” Gina McLellan, a volunteer who has spent the week transporting turtles to shelter in her own car, told the Washington Post. “With this kind of event, it’s a classic display of humanity toward animals.”

While some people slather mayonnaise on their sandwiches, Israel’s National Sea Turtle Rescue Center uses the condiment for a unique purpose: to treat endangered turtles after oil spills, The Associated Press (AP) reported.

The series “Imaginary Earths” speculates what the world might be like if one key aspect of life changed, whether related to the planet or humanity.

More than 100 miles (161 kilometers) of Israel’s normally pristine Meditteranean coastline have been stained with thick globules of tar that washed up after an oil spill off the coast of the country last week. Authorities have yet to identify the culprit, but they say it is harmful to both humans and marine life.

A tangled mass of what looked like discarded yellow rope recently washed up on a beach in Texas. But this peculiar knotty pile wasn’t garbage. It was a colorful sea whip — a type of soft, flexible coral.