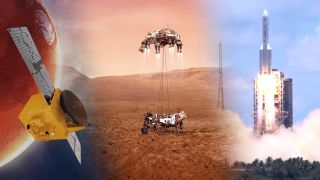 It’s a busy February for Mars, with three probes from three separate countries arriving at the Red Planet over the course of just nine days. But this Martian party didn’t happen by coincidence — it has to do with the mechanics of both Earth and Mars’  orbits.

The United Arab Emirates’ first interplanetary mission, the Hope probe, achieved Mars orbit Tuesday (Feb. 9), as Live Science sister site Space.com reported. China’s first interplanetary mission, Tianwen-1, is scheduled to enter its own Martian orbit Wednesday (Feb. 10). The Chinese probe includes both an orbiter and a lander with a rover onboard, which is expected to try to land on the surface in May. And on Feb. 18, NASA’s first-of-its-kind descent vehicle will reach Mars and plunge directly through its atmosphere. If all goes according to plan, the vehicle will shed its outer shell and use rockets to stop its descent at the last moment. Then it will hover above the surface to lower the rhinoceros-sized, nuclear-powered, $2.7 billion Perseverance rover to the dirt via skycrane.

All these robots showing up at almost the exact same time is no coincidence, said Jonathan McDowell, a Harvard University astrophysicist and spaceflight expert.

Mars and Earth are like “runners on a circular racetrack,” he said. “And the really fast runner [Earth] regularly laps the runner just on the outside [Mars]. So sometimes they’re right next to each other, and sometimes they’re on opposite sides of the track.” This Earth-Mars cycle, meaning Earth completely laps Mars, takes about two years to complete.

It would take an enormous rocket, tons of fuel and much more time to reach Mars from Earth while the planets are far away from each other, McDowell told Live Science. But launching while the planets are at their absolute closest — when they are 38.6 million miles (62.1 million kilometers) apart on average —  isn’t the most efficient way to get to Mars either.

There’s an earlier point in the planets’ two-year cycle where the journey takes less time and requires less fuel. At that point, which occurs once during the two-year cycle, Earth is a bit behind Mars but continues to move faster than its neighbor. This positioning allows the spacecraft to enter a so-called “Hohmann transfer orbit,” named after German engineer Walter Hohmann, who worked out the underlying mathematics in 1925.

Here’s how that works:

No rocket carries enough fuel to burn all the way between Earth and Mars, a distance that ranges between tens and hundreds of millions of miles.

That means any interplanetary adventure begins with a brief, intense period of acceleration, followed by a long stretch of coasting. The job of the rocket engines during that initial period of acceleration is to put the spacecraft into an orbit around the sun that will intersect with Mars as soon as possible. The most efficient path between the planets is therefore the solar orbit intersecting with Mars that can be reached with the least expenditure of fuel, and that orbit becomes available once every two years.

But space agencies don’t have to nail that day exactly. As long as they launch during a window of a couple weeks around the date,they can place their spacecraft on Hohmann transfer orbits. Tarry longer than a couple weeks, however, and the trip starts getting much more difficult very quickly.

The Hope orbiter launched July 19, 2020, Tianwen-1 on July 23 and Perseverance on July 30. The gaps between the spacecrafts’ arrivals don’t exactly line up with their launch dates due to minor differences in their rocket technology, trajectories through space and destinations, McDowell said. (It takes a different angle of approach, for example, to plunge directly into the planet’s atmosphere than it does to enter a high orbit as Hope has done.)

It’s not the first time Martian orbital space has been this crowded, McDowell pointed out. The Soviet Union launched four spacecraft to Mars in 1973, though one failed to attain orbit and none of the other three worked as intended upon arrival. Two Soviet spacecraft and one American spacecraft launched to Mars in 1971, and all had at least partially successful missions. (Both nations planned additional probes that year, but the American Mariner 8 probe failed during launch and the Soviet Kosmos 419 never escaped low-Earth orbit.)

What’s different this year, McDowell said, is the sheer diversity of spacecraft reaching Mars, and the fact that several additional probes are already active around the planet. NASA has three orbiters active in Martian orbit, the European Space Agency (ESA) has one of its own and one orbiter that’s a joint project with the Russian Roscosmos, and the Indian Space Research Organization has an active orbiter as well. NASA’s Curiosity rover and InSight lander are also still active on the Martian surface.

Despite that relatively crowded situation, McDowell said he doubts any of the probes will even come within tens of thousands of miles of each other, even if none of the countries had checked their trajectories with each other in advance.

Categories: News
Tagged: Earth, expected to try to land on the surface in May, Live Science sister site Space.com reported

China has made it to Mars. The nation’s first fully homegrown Mars mission, Tianwen-1, arrived in orbit around the Red Planet Wednesday (Feb. 10), according…

China’s Tianwen-1 spacecraft snapped its first image of Mars as the mission makes its final approach; the probe will enter orbit around the Red Planet…