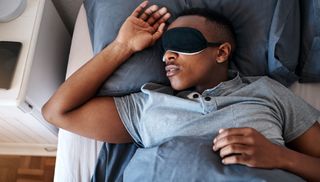 During the most peaceful sleep, some people snore obnoxiously loud, ruining the chances of slumber for anyone sharing their bedroom. But even those who don’t snore do breathe louder when they nod off than when they’re awake. Why do people breathe so loudly when they sleep?

The sound made when you breathe — whether awake or asleep — is caused by the vibration of air moving through the breathing tube, said Dr. Timothy Morgenthaler, a pulmonologist and sleep medicine specialist at the Mayo Clinic in Minnesota. How loud the breathing sounds depends on how narrow the breathing tube is and how fast air travels through it. “You can almost view it as a musical instrument,” he said.

When you breathe in, rapid air movement flowing into your upper airway — the part of the respiratory system that extends from the mouth to the larynx — decreases pressure in the entire respiratory tract, also known as the airway. This pressure change can collapse the upper airway which obstructs breathing. A reflex in the upper airway prevents this collapse and keeps your pipes open when you’re awake. “Because it’s open, the flow through that airway is not turbulent, so the air moves without a lot of sound,” Morgenthaler told Live Science. But when you’re asleep, that reflex isn’t as strong. The upper airway tends to partially collapse, and breathing becomes noisier.

Sleep, especially during rapid eye movement (REM), also leads to lower muscle tone around the airway, Morgenthaler added. In other words, the muscles that support the airway relax, allowing the breathing tube to constrict. When the airway gets narrower, the velocity of the air moving through it increases. The air vibrates more and creates more sound.

The narrowness also means your breaths become quick and shallow. The average person takes about 14 breaths per minute while awake and 15 or 16 while asleep, Morgenthaler said. Although you breathe more frequently while sleeping, you actually take in less oxygen and push out less carbon dioxide because your body’s need for ventilation isn’t as high as when you’re awake. “We’re not expecting to go off and run or chase an animal or gather crops,” he said.

If a person’s breathing tube becomes particularly narrow, they may begin to snore. This usually happens when the airway reaches the diameter of a McDonald’s straw, which is slightly wider than regular straws, Morgenthaler said. When it’s this small, not only does the air inside the airway vibrate, but so do tissues in the area, causing snoring.

If a person’s airway narrows further during sleep, they may develop obstructive sleep apnea. The airway can become so narrow that breathing is impossible, and the person wakes up to gasp for air. Even in people without sleep apnea, the airway may narrow this much up to four times per hour. When it occurs more often, it becomes obstructive sleep apnea. Losing weight is often an effective treatment because excess fat around the airway can obstruct breathing. Morgenthaler also recommended skipping alcohol close to bedtime because it triggers the surrounding muscles to relax. If that doesn’t help, the person may need a machine such as a continuous positive airway pressure (CPAP) to keep the airway open during sleep, he said.

The coronavirus SARS-CoV-2 may latch more easily onto the airway cells of people with type A blood compared with those with type B or O blood, a new study suggests. The findings hint at a possible explanation for why, throughout the pandemic, studies have found those with type A blood are likelier to catch COVID-19 and develop severe symptoms than other blood types.

Our brains need sleep to work properly. But it turns out you don’t need a brain to sleep.

MIT scientists have figured out how to manipulate your dreams by combining an app with a sleep-tracking device called Dormio. In their new study, the researchers were able to insert certain topics into a person’s dreams, with some pretty bizarre outcomes.

Scientists have successfully “talked” to a sleeping person in real-time by invading their dreams, a new study shows. The researchers say it’s like trying to communicate with an astronaut on another world.

Hearing aids are small electronic devices that a person wears in or behind their ears. These devices amplify ambient sound and allow people with mild to severe hearing loss to hear the sounds around them. They do not restore a person’s hearing, but rather increase the volume of environmental sounds.