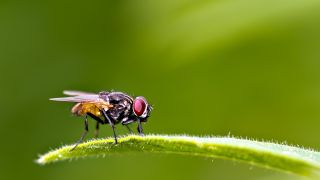 A fly buzzes past your head and lands nearby; you snatch a flyswatter or roll up a magazine and approach cautiously — and you strike!

But no matter how quick you are, the fly is almost always faster, and it usually manages to evade your wallop and escape unharmed. (Is it trying to annoy you?!)

Flies have many adaptations that lend them heightened speed, maneuverability and perception, making them very, very good at detecting and evading even the swiftest swats. And new evidence shows that flies’ modified hind wings play an important part in launching them into a speedy takeoff — often just in the nick of time.

House flies (Musca domestica) belong to the order Diptera, or true flies. Diptera flies possess modified hind wings that have evolved into tiny, sticklike structures with a knob at the end, called halteres. Their vibrations help the insects stabilize their bodies while in flight, by sensing body rotations and transmitting information to the wings.

Flies in the Diptera subgroup Calyptratae, which includes house flies, also vibrate their halteres while walking, but scientists didn’t know why. In a study published online Jan. 13, 2021 in the journal Proceedings of the Royal Society B: Biological Sciences, researchers investigated Calyptratae flies to see if haltere oscillation affected their transition into the air, directing additional sensory input to help coordinate movements in the wing and leg muscles.

Using high-speed cameras to capture tethered and free laboratory-reared flies during takeoff, the scientists recorded footage at speeds up to 3,000 frames per second. They found that Calyptratae flies launched themselves around five times faster than other flies; their takeoffs required an average of about 0.007 seconds (7 milliseconds) and just one wingbeat.

“None of the Calyptratae had a takeoff duration longer than 14 milliseconds [0.014 seconds],” the researchers reported. By comparison, non-Calyptratae flies’ takeoffs lasted about 0.039 seconds (39 milliseconds) and required about four wingbeats, according to the study.

Next, the researchers anesthetized the flies and removed the halteres, which all Diptera flies have. Calyptratae flies lacking these knobby structures took a lot longer to become airborne, but takeoff time wasn’t affected in non-Calyptratae flies without halteres. Stability during takeoff also suffered with haltere removal, but only in Calyptratae flies.

For example, the Calyptratae insects known as blow flies that attempted escape takeoffs without their halteres “always resulted in a crash landing,” the scientists reported.

“This indicates that for Calyptratae flies, haltere input is necessary for fast and stable takeoffs,” said lead study author Alexandra Yarger, a postdoctoral researcher at Imperial College London. Yarger performed the fly research with the Fox Lab in the Biology Department at Case Western University, in Cleveland, Ohio.

Being able to escape predation is a big plus for an animal, and Calyptratae flies are extremely successful; with approximately 18,000 described species, they comprise about 12% of Diptera diversity, Yarger told Live Science in an email.

“When performing an escape takeoff there will always be a tradeoff between speed and stability, but the Calyptratae seem to have found a way to negate some of the loss in stability through the use of their halteres,” Yarger said. “The halteres allows Calyptratae to perform faster and more stable escapes than many other fly species.”

In the blink of an eye

Halteres aren’t the only secret weapon in a fly’s evasive arsenal; once a fly is airborne, it can execute maneuvers that would be the envy of a fighter jet pilot. Fruit flies can change course in under 1/100th of a second — about 50 times faster than an eye can blink, Live Science previously reported. In experiments, perfectly timed wing flaps generated enough force to rapidly propel the flies away from a predator while in mid-air.

“These flies roll up to 90 degrees — some are almost upside down — to maximize their force, and escape,” Florian Muijres, who studied the biomechanics of flight at the University of Washington in Seattle, and is now at Wageningen University & Research in the Netherlands, told Live Science in 2014.

Flies also have exceptional vision, which helps them plan their jumps away from a threat. About 200 milliseconds before takeoff, fruit flies use visual input warning of looming danger to adjust their posture and pinpoint the direction that will launch them to safety, scientists wrote in 2008 in the journal Current Biology.

In fact, their enhanced perception juggles up to six times more visual input in one second than humans can, the BBC reported in 2017.

Animal brains perceive the passage of time by processing images at speeds known as the “flicker fusion rate,” a term describing how many images flash into their brains per second. Roger Hardie, a professor emeritus of cellular neuroscience at the University of Cambridge in England, implanted electrodes into the photoreceptors of flies’ eyes to measure their flicker fusion rate, calculating it to be 400 times per second; the average flicker fusion rate for humans is about 60, according to the BBC. This means that movement you perceive as “normal” moves like slow-motion to a fly.

With all these built-in advantages, it’s no wonder that the fly you’re trying to swat can escape. However, one approach that might improve your chances is aiming your swat at a spot where the fly is likely to go, rather than where it’s resting, Michael Dickinson of the California Institute of Technology in Pasadena told The Independent in 2011.

“It is best not to swat the fly’s starting position,” Dickinson said. “Aim a bit forward of that to anticipate where the fly is going to jump.”

Then again, you could also just leave the fly alone, Yarger added. “They have just as much right to survival as any other animal,” she said.

EDITOR’S NOTE: The article was updated at 11:35 a.m. ET on Jan. 13 to include quotes from the lead researcher and video of experiments.

Two newly discovered fungi species have a similarly macabre mode of action: They eat flies alive while using them to drop spores on new victims.

Australia’s avian celebrity Joe the Pigeon is getting a new lease on life after authorities determined he is not a biosecurity threat.

If you want to see a rigid pencil turn to rubber, just ask an elementary-school student. In a favorite playground trick, an amateur magician picks up a pencil near the tip and lightly jiggles the whole thing up and down. When the illusion is performed correctly, the straight line turns into a wiggling wave.