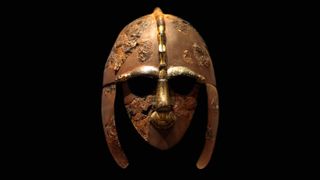 The helmet found at the Sutton Hoo boat grave is one of the most iconic archaeological discoveries ever made in the U.K.
(Image credit: Universal History Archive/Universal Images Group via Getty Images)

The burial contains numerous goods, including an ornately decorated helmet, that hint at the possible identity of the remains. Researchers have been studying those artifacts since a team, led by archaeologist Basil Brown, discovered the cemetery in 1939.

To learn more about the secrets of Sutton Hoo and who might be buried there, Live Science talked with several researchers. Many thought that King Raedwald, who ruled a kingdom in East Anglia and died around A.D. 627, is the best candidate. But even that’s just a best guess. Historical records dating to the period are limited, and the remains of those buried at the site are completely decayed, leaving no physical remains to analyze, the researchers said.

What is Sutton Hoo?

It’s no surprise that a movie has been based on Sutton Hoo, as it’s considered one of the most famous archaeological discoveries ever made in the United Kingdom. And there’s already built-in drama: The cemetery contains multiple burials, although many have been heavily robbed. The most famous burial, and one that robbers missed, is known as the “great ship burial” and contains the remains of a 88.6-foot-long (27 meters) ship that has a burial chamber filled with 263 artifacts.

These artifacts include an intricate gold belt buckle that depicts a mix of snakes, beasts and birds of prey. They also include silverware and coins from the Byzantine Empire, a sword that has a hilt made of jewels and gold dress accessories that have garnet minerals from Sri Lanka.

Archaeologists point to Raedwald because the date of the coins and other artifacts matches well with the time of his reign and because the burial does not seem to be fully Christian — something that jibes with what historical records say about him. Sutton Hoo’s location in East Anglia and the richness of its artifacts link it to the East Anglian royal dynasty.

Raedwald ruled a kingdom in East Anglia and struggled over whether he should be Christian or pagan. At one point, he built a temple that had a Christian altar and a pagan altar side by side, St. Bede (lived A.D. 672-735) wrote in his book the “Ecclesiastical History of the English People.”

Raedwald’s religious dilemma is important, as scholars have noted that there are few artifacts at Sutton Hoo that have Christian motifs. “He seemed at the same time to serve Christ and the gods whom he had served before,” wrote St. Bede (translation by J.A. Giles). “In the same temple, he had an altar to sacrifice to Christ and another small one to offer victims to devils,” Bede wrote, calling Raedwald “noble by birth, though ignoble in his actions.”

Moreover, Raedwald was a prominent king during his time, intervening in a dispute over who should be King of Northumbria by using his army to ensure that Edwin, one of the claimants, was crowned.  The Sutton Hoo ship burial — with its ornate accessories made of gold and jewels — seems rich enough for such a ruler.

“I would be surprised if it wasn’t Raedwald. Right date, right amount of bling,” said Tom Williamson, a history professor at the University of East Anglia in England.

“In general, I would say the weight of evidence is on Raedwald,” added Alan Stahl, curator of numismatics (the study of coins and other currency) at the Firestone Library at Princeton University. Stahl’s research of the boat-burial coins suggested that some of the coins were minted after A.D. 595, but that all of the coins may have been minted before A.D. 613. “Raedwald’s reign and death date of around 627 fits well with this chronology,” Stahl said.

However, some archaeologists were more cautious in their assessments.

“I think the balance of evidence suggests the burial site is connected to the East Anglian royal dynasty, and I think this is as far as we can, and should, go with this question,” Howard Williams, an archaeology professor at the University of Chester in England, told Live Science. He noted that althoughRaedwald, or perhaps another East Anglian king, could be buried at Sutton Hoo, we shouldn’t rule out the possibility that the burial could be from a king of a neighboring East Saxon kingdom.

Another possibility is a relative of Raedwald. “If you held a gun to my head, I would say Raedwald, but equally I wouldn’t be at all surprised if it turned out to be someone else,” said Alex Woolf, a senior lecturer in medieval history at the University of St. Andrews in Scotland. “Raedwald is probably the best bet, but far from certain. His son Eorpwald had a short reign after him, and there are other members of the family in the seventh century we know little about.”

In 1993, Woolf and two colleagues wrote a paper published in the journal Anglo-Saxon England suggesting that the burial could hold the remains of someone from the East Saxon kingdom. Ultimately, “I don’t think we can know for sure” who was buried in the boat grave, Woolf said.

However, Barbara Yorke, an emeritus professor of early medieval history at the University of Winchester in England, said other East Anglian kings from the time period seem unlikely for a variety of reasons. For example, these kings reigned for short periods, had strong ties to Christianity or died before the minting of the coins. Therefore, Raedwald is the most likely candidate, she said.

“Raedwald was the most powerful of the East Anglian kings, and the ship burial seems the richest and most impressive of the Sutton Hoo burials,” Yorke said.

Some of the researchers cautioned that we cannot be certain the boat burial even belongs to a king. “The Staffordshire hoard and other more recent finds show that finds of very high-quality gold and garnet work were more common than was thought at the time of the main publication of Sutton Hoo in the 1970s, and although there is no doubt that such items denoted very high status, they may not have been held exclusively by kings,” said Gareth Williams, a curator at The British Museum. (Discovered in 2009, the Staffordshire hoard is an Anglo-Saxon treasure holding some 3,500 items made from gold, silver and other metals that dates to the seventh century.)

Williams pointed out that there is also a debate over the age of the coins at Sutton Hoo. “Most recent commentators would prefer a broader date range, which would certainly include A.D. 625 but would extend by some years to either side. Raedwald is therefore a strong possibility, but not the only one,” Williams said.

Recently, archaeologists at Sutton Hoo have been using lidar, a technology that uses a laser to map out terrain, along with ground- penetrating radar to examine details of how the cemetery was constructed. Many researchers told Live Science that although it is unlikely that we will know for sure who was buried at the site, Sutton Hoo is still worth studying.

“I do not think we will ever be able to name the individual buried at Sutton Hoo with certainty, but this does not keep me awake at night,” said Sue Brunning, curator of early medieval and Sutton Hoo collections at The British Museum. “While a name would be the cherry on the cake, there is so much of value to learn from the archaeology of the burial, and I feel that it is more rewarding to direct our ideas and energy into the wider context.”

Around Jesus’ time about 2,000 years ago, a toddler in Roman-era Europe was laid to rest in a burial containing a funeral banquet and a pet dog wearing a belled collar, according to the French National Institute for Preventive Archaeological Research (INRAP). Researchers don’t yet know whether the puppy died of natural causes or whether it was killed to accompany the toddler into the afterlife.