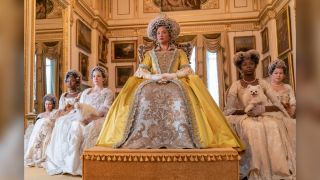 In the Netflix series, “Bridgerton,” Queen Charlotte (played by Golda Rosheuvel) is a fan of Pomeranian dogs, just like the queen was in real life.
(Image credit: Courtesy of Netflix)

Anyone watching Netflix’s latest hit show, “Bridgerton,” knows that the matchmaking Queen Charlotte had a penchant for Pomeranian pups. And in fact, this fondness was true of the real-life Queen Charlotte. She brought them with her when she moved from Pomerania in central Europe to the United Kingdom to marry King George III in 1761. Her love of the lap dog was then passed down through the royal generations. Her son, King George IV also liked the breed and Queen Victoria owned dachshunds, pugs and Pomeranians.

One of the most famous royal dogs was a small terrier called Caesar. “[He] had a prominent place in Edward VII’s funeral procession ahead of the other monarchs who attended in 1910,” said Richard Fitzwilliams, a royal commentator based in London. Further down the line, King Edward VIII — who was forced to abdicate in disgrace in order to marry the American divorcée Wallis Simpson in the 1930s — also owned pugs, which we know from another Netflix period drama, “The Crown.”

But are the British royals really responsible for kicking off the lap dog craze? And when exactly did these toy breeds become popular beyond court life?

“Perfect Pets” is the ultimate guide to the world’s most popular animal companions. Find out what makes dogs man’s best friend, why cats were worshipped in ancient Egypt, plus plenty of other fascinating facts about our furry, feathered — and even some scaly — friends. Inside you’ll learn all about these amazing animals and their unique abilities, plus some top training tips and care guides to help keep your pets happy and healthy. View Deal

Small dogs emerged not long after dogs were domesticated; one of the oldest little dog remains was found in the Middle East and dates to 12,000 years ago, a 2010 study in the journal BMC Biology found. But it’s hard to know when these tiny canines became in vogue because large datasets on breed popularity don’t go back that far in time. However, the available research does indicate that people are significantly influenced by trends and celebrity culture when it comes to picking their pooches.

Stefano Ghirlanda, a professor of psychology at Brooklyn College, showed this influence by delving into the American Kennel Club’s puppy registration data between 1926 and 2005. In a 2013 study in the journal PLOS One, he and colleagues cross matched the popularity of registered dog breeds with their typical characteristics such as health, longevity and behavioral traits, including aggression, trainability and fearfulness. You’d expect there to be a link between desirable traits and breed popularity, but that just ain’t so.

“We found absolutely no correlation in anything when we did this,” Ghirlanda told Live Science. “Breed popularity fluctuates quite a lot and that made us think it was just a question of fashion.”

His data shows that small lap dogs seemed to experience a period of popularity during the 1970s and then fell out of favor, only to enjoy a renaissance again in the early 2000s. “Pugs, for example, had a bout of popularity in the 1970s and 2000s. Interestingly, dachshunds follow the same pattern,” Ghirlanda said. This cyclic popularity is what made Ghirlanda think people aren’t picking their dogs based on which breed would best fit their lifestyle, but are instead influenced by popular culture when making the decision.

That’s why in 2014 Ghirlanda published a follow-up study, also in PLOS One, checking whether blockbuster movies featuring dogs caused any spikes in the number of registered puppies of the same breed in the years following several films’ releases. “You can pretty much predict if a breed is going to become popular just from looking at ticket sales during a movie’s opening week,” Ghirlanda said. “If the movie is successful, then it boosts the popularity of the breeds by quite a bit.”

For example, Disney’s 1996 “101 Dalmatians” boosted the spotty dogs’ popularity by close to 20% in the decade after the movie was released, according to Ghirlanda’s calculations. The 1943 film “Lassie Come Home” also saw a similar bump in rough collie breed registrations.

What all this means, Ghirlanda said, is that the question of when lap dogs became popular is impossible to answer. Because they’ve probably cycled through phases of being popular and then unpopular, and they’ll continue to go round in this sequence as long as popular culture dictates. However, it’s fairly certain that the royals were early adopters of lap dogs and that they may have influenced the desire for such breeds, at least for a certain set of people.

“Back in the day, there wasn’t much popular culture, but for sure people were paying attention to what the queen was doing, and pet dogs were only a privilege for rich people,” Ghirlanda said. That’s because dogs had to be fed, and so for people further down the class ladder, dogs had to earn their keep by helping out with the hunt or performing other helpful functions. Royal lap dogs, by comparison, were there to be enjoyed and spoiled. King Edward VIII and Wallis Simpson were perhaps the worst offenders for spoiling their pugs. “They greeted guests on gold Cartier leads and had diamond-studded collars, dining out of silver bowls and sleeping on velvet pillows,” Fitzwilliams said.

Cats and dogs may eventually need their own COVID-19 vaccines to prevent the coronavirus from evolving further and “spilling” back to humans, according to one group of researchers.

Dogs know where their paws end and the world begins, a new study shows, adding our furry companions to a group of animals that, like humans, recognize themselves as distinct entities from their environment.

In the cat world, there’s a saying that you should keep your humans’ friends close and your humans’ enemies … just as close. That’s the takeaway of a new study that shows that cats, unlike dogs, will gladly accept food from people who are not nice to their owners.

Archaeologists have discovered a fantastical-looking, 1,500-year-old house in Turkey that was decorated with illusory wall paintings and terracotta tiles on the floor with puppy prints and possible chicken decorations pressed into them.

It’s no accident that cats are adorable: We’ve selectively bred them across generations for maximum cuteness. But that breeding has a downside:  It’s left some of our feline friends with permanent frowny faces that cannot show emotions.