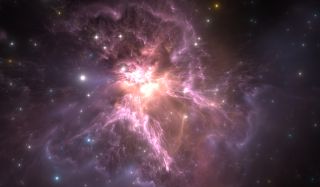 Who came up with the cosmological constant?

Albert Einstein, the famous German-American physicist, came up with the cosmological constant, which he called the “universal constant,” in 1915 as a means to balance certain calculations in his theory of general relativity. At the time, physicists believed the universe was static — neither expanding nor contracting — but Einstein’s work suggested that gravity would cause it to do one or the other. So, to mesh with the scientific consensus, Einstein inserted a fudge factor, denoted by the Greek letter lambda, into his results, which kept the cosmos still.

Yet a little over a decade later, the American astronomer Edwin Hubble noticed that galaxies were actually moving away from us, indicating the universe was expanding. Einstein called lambda his “greatest mistake.”

Hubble’s observations negated the need for a cosmological constant for decades, but that changed when astronomers examining distant supernovas in the late 1990s discovered that the cosmos was not only expanding, but accelerating in its expansion. They named the mysterious anti-gravity force required to account for this phenomena “dark energy.”

In the 1920s, Russian physicist Alexander Friedmann developed an equation, now called the Friedmann Equation, which describes the properties of the universe from the Big Bang onward, according to an online tutorial from Georgia State University.

By dusting off Einstein’s lambda and plugging it into the Friedmann equations, researchers could model the cosmos correctly — that is, with an accelerating expansion rate. This version of the Friedmann Equation now forms the backbone of contemporary cosmological theory, which is known as ΛCDM (Lambda CDM, where CDM stands for cold dark matter) and accounts for all the known components of reality.

So, what is this magic number then?

However, no one truly understands what lambda is. Most physicists consider it interchangeable with the concept of dark energy, but that doesn’t make things any clearer because dark energy is simply a placeholder describing some unknown anti-gravity substance. So, we’ve essentially reverted to using Einstein’s fudge factor.

One potential explanation for the cosmological constant lies in the realm of modern particle physics. Experiments have verified that empty space is permeated by countless virtual particles constantly popping in and out of existence. This ceaseless action creates what is known as a “vacuum energy,” or a force arising from empty space, inherent in the fabric of space-time that could drive apart the universe.

But connecting vacuum energy to the cosmological constant is not straightforward. Based on their observations of supernovas, astronomers estimate that dark energy should have a small and sedate value, just enough to push everything in the universe apart over billions of years.

Yet when scientists try to calculate the amount of energy that should arise from virtual particle motion, they come up with a result that’s 120 orders of magnitude greater than what the supernova data suggest.

To add to the conundrum, some researchers have proposed that the cosmological constant might not be a constant at all, but rather changes or fluctuates with time. This theory is called quintessence and some projects, such as the Dark Energy Survey, are currently making precise observations to see if it has any observational support.

In the meantime, cosmologists will continue to use lambda. They may not know what it is, but they know that they need it to make the universe make sense.

A weird, super-powerful particle that’s not truly a particle could have dominated the universe when it was just a second old, releasing a flood of ripples that permeated all of space-time.

One of the lingering mysteries of the universe is why anything exists at all.