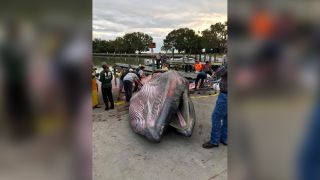 When the corpse of the behemoth washed up along Sandy Key — underweight with a hard piece of plastic in its gut — scientists thought it was a subspecies of the Bryde’s (pronounced “broodus”) whale, a baleen whale species in the same group that includes humpback and blue whales. That subspecies was named Rice’s whale. Now, after genetic analysis of other Rice’s whales along with an examination of the skull from the Everglades whale, researchers think that, rather than a subspecies, the Rice’s whale is an entirely new species that lives in the Gulf of Mexico.

The discovery, detailed Jan. 10 in the journal Marine Mammal Science, also means that there are fewer than 100 members of this species living on the planet, making them “critically endangered,” according to a statement from the National Oceanic and Atmospheric Administration (NOAA).

According to the study, the researchers looked at records of the Bryde’s whale in the Caribbean and greater Atlantic Ocean and concluded the whales they spotted were evidence “of an undescribed species of Balaenoptera from the Gulf of Mexico.”

The lead study author Patricia Rosel and her co-author, Lynsey Wilcox, both at Southeast Fisheries Science Center, completed the first genetic tests of this whale in 2008, finding that the skull of the Rice’s whale was different than that of Bryde’s whales.

Rosel and her colleagues think the whales in the new species can live approximately 60 years, but given that there are so few in existence, researchers need further observation of the whales to get a better idea of their life expectancy.

Given their location in the Gulf of Mexico, Rice’s whales are particularly vulnerable to oil spills, vessel strikes and energy exploration and production, NOAA added.