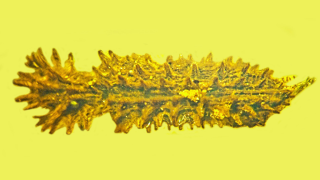 This image shows a top view of the newfound cylindrical bark beetle Stegastochlidus saraemcheana, with its head on the left side.
(Image credit: George Poinar Jr., OSU)

A tree in an ancient forest sits covered in moss, lichens and craggy bark — when suddenly, a chunk of that bark begins to scuttle around.

But it’s not the bark that’s scurrying; it’s a bizarre little creature called Stegastochlidus saraemcheana, a newfound genus and species of cylindrical bark beetle. Scientists recovered the creature, which looks like a walking scrub brush, from 100-million-year-old amber collected in the Hukawng Valley of northern Myanmar. That dates the beetle back to the Cretaceous, the period between 145.5 million and 65.5 million years ago.

“The beetle must have spent its life among moss, lichens and fungi, either attached to tree trunks or on the forest floor,” study co-author George Poinar Jr., a paleobiologist and entomologist at Oregon State University, said in a statement. “He is hiding under a spectacular camouflage of his own making, allowing him to blend into a mossy background.”

This jagged ornamentation makes the beetle look less like an insect and more like a  chunk of tree bark. In their paper, published Dec. 15 in the journal Biosis: Biological Systems, the authors helpfully point out which end of the peculiar bug is its head and which is its body.

From a top view, the head juts off from the tubular body as a rounded, tuft-like structure covered in spikes. Two segmented antennae extend from the head and end in a club-like shape. From a side view, the head sits at one end of the beetle, with the forelegs and midlegs just behind it. The hindlegs sit slightly farther back on the body, in front of the beetle’s cylindrical abdomen.

The whole bug measures just 0.17 inches (4.2 millimeters) long, but it crams more than 100 spike-like structures onto its back and head. These spikes likely helped the beetle blend in with moss, lichens and fungi, the authors wrote.

“A close association with fungi is indicated by strands of fungal spores, known as conidia, attached to the beetle’s cuticle, or outer covering,” Poinar said in the statement. A pair of parasitic mites were also found latched onto the beetle by their mouthparts, the authors noted. While snacking on the beetle some 100 million years ago, these mites also became trapped in amber.

The beetle’s pointed mouthparts hint at a carnivorous diet, so the bug likely preyed on other invertebrates, the authors noted. With such a narrow body, the beetle could easily slip into galleries — vertical structures built in wood by other beetles — and potentially gobble up the pupae and larvae housed there.

Two thumb-size beetles found preserved in an English bog may look as though they died as recently as yesterday, but in reality they’re nearly as ancient as Egypt’s pyramids, new research finds.

At Live Science we cover hundreds of science news stories each month, totalling more than one thousand over the course of a year. That’s a…