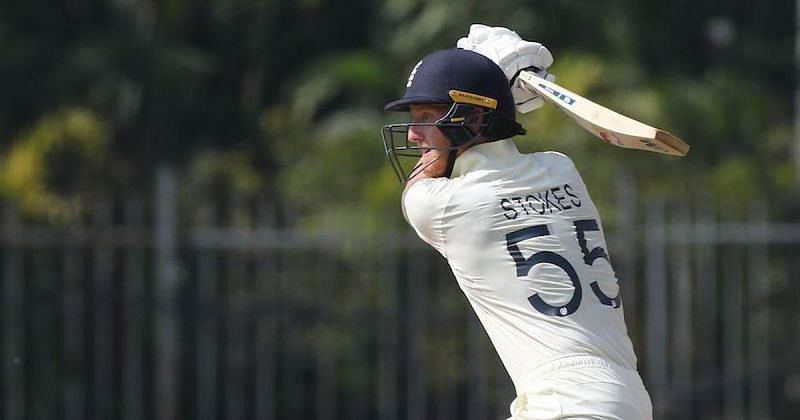 Ben Stokes scored a belligerent 82 before his 124-run stand with Joe Root was broken by left-arm spinner Shahbaz Nadeem. The England all-rounder tried to smash the ball out of the ground but couldn’t clear Cheteshwar Pujara at deep square leg.

Pujara fumbled and almost dropped a sitter. But the 33-year-old held on to the catch after a few juggles, and Ben Stokes had to depart after a thoroughly entertaining innings. Here is the video of his dismissal:

With England skipper Joe Root making his intentions clear that the visitors will look to score big in their first innings, Team India looked to make early inroads on Day 2, as Ben Stokes was new at the crease.

With a well-set Root at the other end, Team India sought an opening from the other end. However, Ben Stokes, after a watchful start, came out all guns firing.

The 29-year-old did ride his luck early on, seeing a few difficult chances put down and having to dig out a homing yorker from Jasprit Bumrah.

However, once he got his eye in, the left-hander picked the gaps for fun and toyed with the Indian bowlers on a flat pitch. Ben Stokes brought out all the shots in his repertoire, bringing up his half-century off just 73 balls.

With not much turn on offer for the Team India spinners, Ben Stokes was unafraid to unleash the reverse sweep against balls pitching on the rough, as the hosts looked bereft of ideas to stop the explosive left-hander.

However, on 82, the left-hander went after a flighted ball from Nadeem that was pitched well outside the leg stump. However, there was not enough distance on the ball to clear Pujara at long leg.

Cheteshwar Pujara fumbles but completes the catch, and that brings an end to an entertaining Ben Stokes innings.

Cheteshwar Pujara fumbles but completes the catch, and that brings an end to an entertaining Ben Stokes innings.

Ben Stokes missed out on a richly-deserving century, but he has provided the hosts much-needed momentum to pile on a big total.

Former Indian opener Gautam Gambhir has lavished praise on Joe Root as the Englishman continued his rich vein of form with a scintillating double hundred. Gambhir believes that a lot of young Indian players can learn from Joe Root on how to play spin even though he is not a batsman from the subcontinent.

Ben Stokes has revealed that he would “run through a brick wall” for Joe Root. The England all-rounder recalled how Root unconditionally supported him during the infamous Bristol brawl saga.