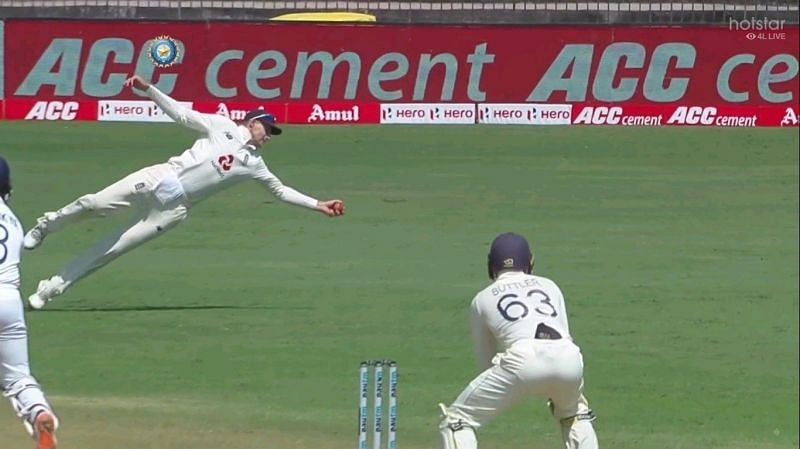 Joe Root took a phenomenal one-handed catch at short cover to dismiss Indian batsman Ajinkya Rahane in the first Test in Chennai. The 32-year-old couldn’t believe his luck as the England skipper seemed to pluck the ball out of thin air.

Off-spinner Dominic Bess gave the ball decent flight outside off-stump and invited Rahane to have a go at him. The Indian vice-captain obliged and absolutely middled the ball on the full towards covers.

It would have been a certain boundary, but Joe Root had other ideas.

Almost parallel to the ground, Root stretched out his left hand and took a blinder to send Rahane back to the dressing room. Here is the video of that sensational catch:

Trailing by 578 runs, Team India needed a solid start from their openers. However, experienced batsman Rohit Sharma nicked one behind early off the bowling of Jofra Archer.

Shubman Gill looked in sublime touch, until he found James Anderson at mid-on. The onus was on Cheteshwar Pujara and Virat Kohli to form a huge partnership in the second session on day three.

However, Bess sent back the Indian captain for just 11 runs, caught by Ollie Pope at short leg.

A lot was expected off Rahane, who was fresh from a brilliant hundred Down Under. But, Joe Root proved to be Team India’s nemesis even in the field, as his unbelievable grab had the hosts four down for just 73 runs.

Team India will need their ‘New Wall’ Cheteshwar Pujara and the exuberant Rishabh Pant to stitch a heroic partnership like they did in Sydney and Brisbane.

England know that they are just a couple of wickets away from India’s tail and can put severe pressure on them.

Dom Bess sends both captains packing … remarkable. What a catch from Joe Root 😮

Dom Bess sends both captains packing … remarkable. What a catch from Joe Root 😮

With India still trailing by over 450 runs, the hosts are in real danger of being asked to follow on and bat again.

Virat Kohli couldn’t make his first innings of the year count, as the Indian skipper was dismissed for just 11. Dominic Bess got the prized wicket of Virat Kohli, with the off-spinner making a great start to the first Test in Chennai.

Shubman Gill looked in marvellous touch once again before a stunning catch by James Anderson forced him to walk back to the dressing room. Young Gill’s 28-ball 29 was packed with elegance and poise, and he looked set for a big score before he got out to a rash shot.