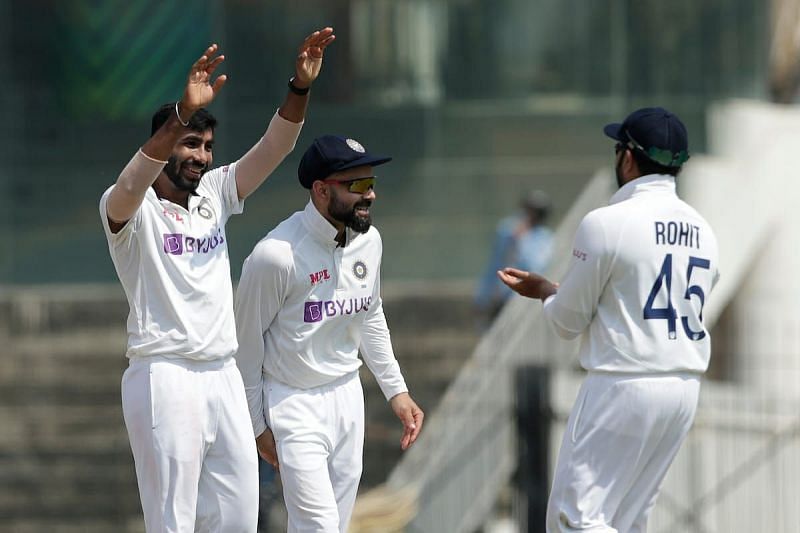 Daniel Lawrence had just come to the crease, following the dismissal of Rory Burns. England got off to a great start, but Burns’ wicket gave India a much-needed lift. Nevertheless, only a few minutes were remaining for Lunch and England would have been eager to see out the session without losing another wicket.

RAHUL VAIDYA FOR THE WIN pic.twitter.com/hb3C2Xscij

RAHUL VAIDYA FOR THE WIN pic.twitter.com/hb3C2Xscij

However, Jasprit Bumrah bowled a brilliant full delivery, which seemed to be reverse-swinging at pace. Lawrence had no foot movement and was caught on his crease.

The ball hit his pads right in front of the stumps and he was adjudged LBW. The England batsman did have a chat with non-striker Dominic Sibley on whether he should go for a DRS review, but eventually decided against it.

Opting to bat first on a good track in Chennai, England started well. Openers Burns and Sibley saw off the new-ball bowlers and pounced on every opportunity to score runs.

The duo added 63 runs for the first wicket before Burns lost the plot and gifted his wicket away. He tried to reverse-sweep Ravichandran Ashwin, but could only glove it to Rishabh Pant.

Daniel Lawrence, who was playing his first innings at the No.3 position, had a tough job of seeing off the last few minutes until Lunch. However, he received an absolute peach of a delivery from Jasprit Bumrah and got o.

That will be Lunch on Day 1 of the 1st Test.

Ashwin, gave India an opening, and then the brilliance of Bumrah got Lawrence.

That will be Lunch on Day 1 of the 1st Test.

Ashwin, gave India an opening, and then the brilliance of Bumrah got Lawrence.

The two wickets have brought Team India right back into the game. With England skipper Joe Root relatively new to the crease, an enthralling second session is in store on Day 1 in Chennai.

Jasprit Bumrah has equalled the world record for most number of away Tests before playing his first home Test. The pacer was named in India’s playing XI for the first match of the four-Test series against England in Chennai.

Jasprit Bumrah bowled his signature booming yorker, which Ben Stokes was just able to keep out on Day 2 of the Chennai Test. The Indian seamer started bowling round the wicket to the English all-rounder early in the day’s opening session, almost providing the hosts with the much-needed breakthrough.