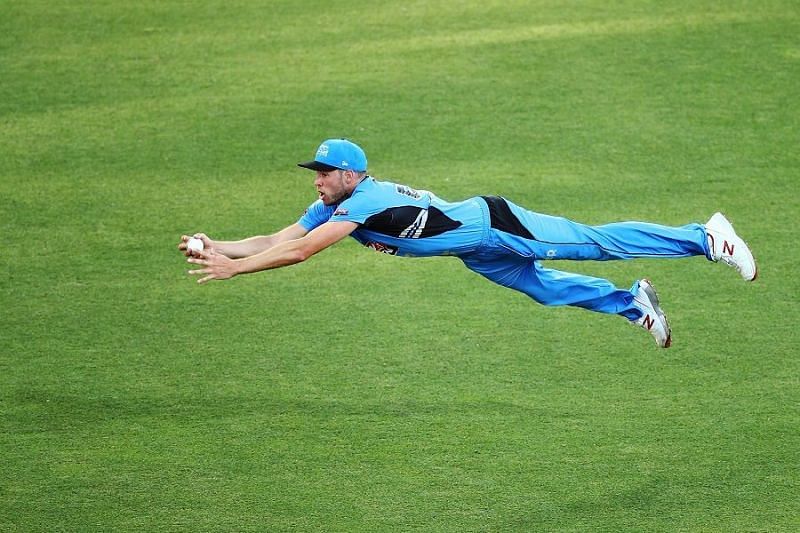 It was the 18th over of the Adelaide Strikers’ innings, with their score reading 110-5, when Labuschagne came on to bowl his orthodox leg-spin.

Michael Neser, looking to up the ante, sensed the opportunity to kickstart the final flourish for his team. Trying to smack Marnus Labuschagne over cow corner, Michael Neser couldn’t quite time the ball as it headed towards the gap at deep midwicket.

However, Ben Laughlin covered ground quickly from long-on and put in a last-ditch dive to complete a sensational one-handed grab; an ecstatic Labuchagne could only watch on in disbelief.

Here is the video of that stunning catch from Ben Laughlin:

The Adelaide Strikers opted to bat first and put the scoreboard pressure on Brisbane Heat in the Eliminator of the 2020-21 BBL season.

Although openers Alex Carey and Jake Weatherhald gave the Strikers a decent start with a 45-run stand, the Strikers were pegged back by wickets at regular intervals.

Nevertheless, the Strikers fancied their chances of a competitive total, as the big-hitting Michael Nesser was in the middle. The all-rounder’s eyes lit up when Labuschagne came on to bowl the 18th over.

However, Ben Laughlin’s stunning grab to send back Michael Neser meant the Strikers were restricted to a paltry 130-7 in their 20 overs. The Heat romped home with an over and six wickets to spare.

Labuschagne was the pick of the Heat bowlers, picking up three wickets and giving away 13 runs. Laughlin went wicketless but was economical, as he gave away 23 runs in his four overs.

Can’t get much more plumb than this. @StrikersBBL have the Heat 3/24 after the powerplay 😮 #BBL10 pic.twitter.com/nVzzKBC3aa

Can’t get much more plumb than this. @StrikersBBL have the Heat 3/24 after the powerplay 😮 #BBL10 pic.twitter.com/nVzzKBC3aa

Chasing 131 runs to win, the Brisbane Heat three quick wickets, but a partnership between Joe Denly and Jimmy Peirson brought the equation down to almost a run-a-ball.

The @HeatBBL never like to do it the easy way! #BBL10 @AdamBurnett09‘s match report 👇https://t.co/yyLhn7mFnK

The @HeatBBL never like to do it the easy way! #BBL10 @AdamBurnett09‘s match report 👇https://t.co/yyLhn7mFnK

The game seemed to go down to the wire, but Jimmy Peirson’s crucial 47* ensured that Brisbane Heat won the game with six wickets and an over to spare.

While the Strikers’ campaign in this season’s BBL has come to an end, the Heat will now face the Sydney Thunder in the BBL knockouts. 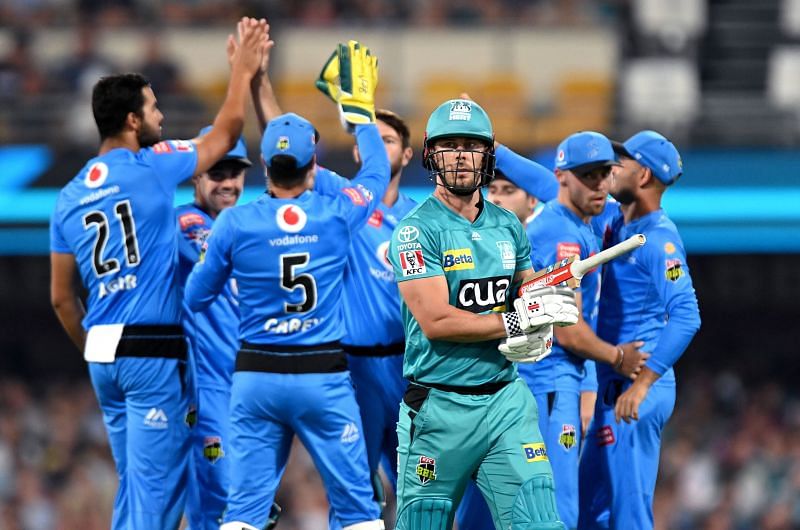 Brisbane Heat emerged victorious in the BBL eliminator as they got the better of Adelaide Strikers by six wickets.

Adelaide Strikers defeated Brisbane Heat by 82 runs in the latest BBL encounter. With only a handful of games remaining in the group stage, the Heat are now likely to find it hard to finish in the BBL playoff spots.

Brisbane Heat are just one step away from the BBL final as they defeated Sydney Thunder by 7 wickets to set up a clash with Perth Scorchers. Sam Heazlett (74*) and Jimmy Peirson (43*) starred with the bat to fetch the win for the Heat.

Brisbane Heat take on Adelaide Strikers in the 13th match of the Big Bash League 2020 (BBL 2020) on Wednesday, at The Gabba in Brisbane.