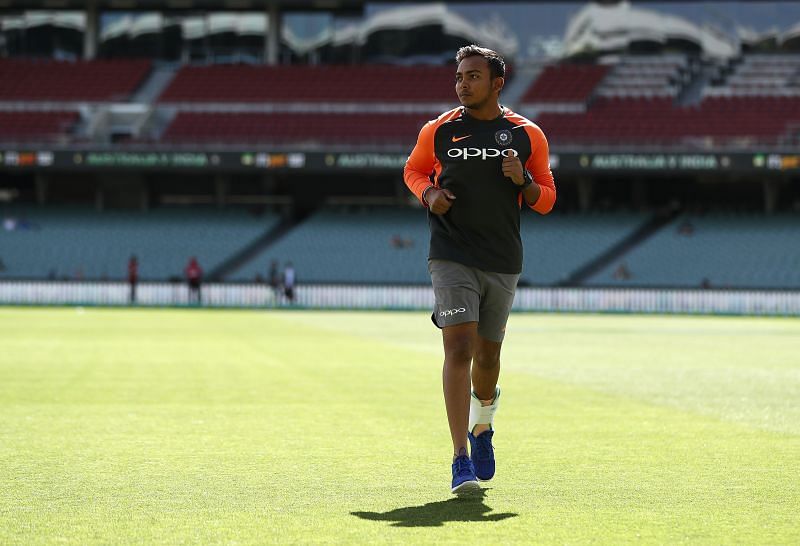 During his latest outing for India at the Adelaide Oval, the 21-year old only managed four runs in two innings, getting cleaned up in the same manner on both occasions. Ever since, there have been questions raised about his batting technique and approach.

It has been announced that a former India batsman, who is also a renowned coach, has been picked to work closely with under-fire Prithvi Shaw to help the youngster rectify the errors in his batting.https://t.co/MDBmswVRTg

It has been announced that a former India batsman, who is also a renowned coach, has been picked to work closely with under-fire Prithvi Shaw to help the youngster rectify the errors in his batting.https://t.co/MDBmswVRTg

Former U-19 World-Cup winning captain Prithvi Shaw had entered the international circuit with enormous expectations following his past accomplishments. However, since his debut for India in 2018, where he scored a ton, Prithvi Shaw has been more a miss than a hit.

Pravin Amre recently told a media outlet regarding his opportunity to work with Prithvi Shaw:

“I’ve known Prithvi from my Air India days, so the bonding is there. We are trying to understand what he needs at the moment rather than telling him what to do.” he added.

Prithvi Shaw had an average IPL campaign for the Delhi Capitals last season, scoring only 228 runs in 13 games.

Selected in India’s Test squad for the tour of Australia, Prithvi Shaw registered a duck and a four in the first Test. His technique came under immense scrutiny, with some former players questioning his place in the playing XI over Shubman Gill‘s.

Pravin Amre acknowledges that Prithvi Shaw requires fine-tuning in his batting technique and has identified fitness as one of the key areas the youngster must focus on, saying in this regard:

“I too believe that Prithvi needs some help. Since there are no red-ball matches now, we’ve started working on his white-ball cricket. Once he goes into the bubble with the Mumbai team either for the Ranji Trophy or Vijay Hazare, we won’t have time to work together.”

Former West Indies fast bowler Ian Bishop believes it will not be a straightforward road back for young Team India opener Prithvi Shaw. The 53-year-old believes Shaw will need to do a lot more than score big in domestic cricket.

India could use their bench in the 5th Test and give chances to Ravindra Jadeja, Prithvi Shaw, Karun Nair and even Hanuma Vihari. Leave your…

The 18-year-old flamboyant batsman from Mumbai, Prithvi Shaw has been in the limelight since he led India to 2018 Under-19 World Cup victory. Shaw who has seven centuries and five fifties at an average of 56.72 in 14 first-class matches was today included in the Indian squad for last two Test matches against England.