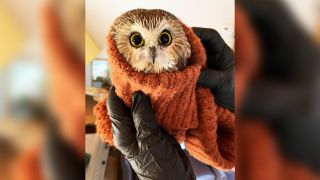 Rockefeller, the stowaway owl found in the Norway Spruce taken to Rockefeller Center, all wrapped up in a sweater.
(Image credit: Ravensbeard Wildlife Center)

This season’s new Christmas hero — a tiny owl stowaway that survived the long drive from upstate New York to Rockefeller Center in Manhattan on a Norway spruce — won’t be taken back to his former home to be released back into the wild.

“There’s been a lot of controversy over the release site,” said Ellen Kalish, director and founder of Ravensbeard Wildlife Center, a nonprofit in Saugerties, New York, where the owl, named Rockefeller after the Christmas tree where he was found, is recovering. “[But] saw-whet owls by nature are nomadic. They basically don’t have a home base unless they’re raising a family, in which case they both help to feed the babies and then they’re off to their solo life.”

This nomadic lifestyle works in Rockefeller’s favor. Rather than “stress him out” on a two-hour journey to his old home in Oneonta, New York, Kalish is planning to release him from the wildlife center into the surrounding woods this Saturday (Nov. 21).

“It’s called a soft release where we’re going to put food out on the platform in case he’s hungry and doesn’t have a successful night of hunting,” Kalish told Live Science. “We believe that he’s going to go where he wants to go.”

In the end, this unexpected adventure will be “just a little detour” for the nocturnal predator, she said.

Kalish learned about the vagabond bird earlier this week, when the wife of a worker who helped transport and secure the 75-foot-long (23 meters) Norway spruce called to ask whether the center rehabilitated owls. The woman’s husband had found what he thought was a baby owl in the famed Christmas tree, but the little fluff was a long way from home.

Kalish agreed to take the owl. “Initially, when I opened the box and I looked at him, I was so grateful that he was alert and bright-eyed and not in a little heap at the bottom of the box,” she said.

She immediately realized it wasn’t an owlet, but a full-grown northern saw-whet owl (Aegolius acadicus); at 2.5 ounces (70 grams), it’s one of the smallest owl species in the United States. (The smallest owl in the world, the appropriately-named elf owl, lives in parts of the American Southwest and Mexico.) Saw-whet owls are named for a call they make, which sounds like a saw being sharpened against a whetting stone, according to The Cornell Lab of Ornithology.

Back at Ravensbeard, Kalish has fed Rockefeller plenty of mice, but “we didn’t watch [him eat] because we don’t want him to associate humans with food,” she said. It’s likely that Rockefeller hadn’t dined or drunk anything for three days, so “we’re just giving him a buffet of all-you-can-eat mice and fattening him up, because he was very thin.”

Otherwise, Rockefeller is doing great. X-rays showed that he didn’t have any fractures and his muscle condition looks good, a vet told Kalish.

As for how Rockefeller became a Christmas tree hitchhiker, he isn’t spilling the beans.

“It’s anybody’s guess; he’s the only one who knows his true story,” Kalish said. “We suspect that he was trapped or stunned. He could even be in a tree cavity and no one noticed, because [saw-whet owls] are so camouflaged.”

Rockefeller isn’t the only unexpected owl “ornament” on record. Last year, a Georgia family was stunned to find an Eastern screech owl in their Christmas tree, according to Fox4 News.

Categories: News
Tagged: according to Fox4 News, according to The Cornell Lab of Ornithology, elf owl, whether the center rehabilitated owls

Brown tree snakes can turn their bodies into lassos to shimmy up power poles and trees — a superpower that has allowed the species to invade new territory, new research has found.

Two northern white rhino embryos have been created in a lab, bringing fresh hope that the animal could be saved from extinction.

Australia’s avian celebrity Joe the Pigeon is getting a new lease on life after authorities determined he is not a biosecurity threat.

Two ancient stone coffins that may have once held the remains of a husband and wife have been rediscovered in a wildlife park near the Israeli city of Tel Aviv.