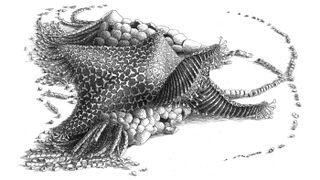 The 480 million-year-old fossil was unearthed in the Moroccan desert more than 17 years ago, but its identity and evolutionary history remained mysteries until now. Scientists have now formally described the specimen in new research published Wednesday (Jan. 20) in the journal Biology Letters.

The new species, Cantabrigiaster fezouataensis, is shaped like a star but lacks other distinguishing features seen in either of the two starfish-like animals alive today: starfish and brittle stars (part of a subphylum called Asterozoa). Because the species lacked these features — the long thin arms of the brittle star and the chunky armor plates around a starfish — researchers concluded it was, therefore, the ancestor of both.

“We’ve discovered exactly how the first starfish-like animal appeared and then how it evolved into those two ones which we have today, which are almost everywhere in the sea,” said study lead author Aaron Hunter, a paleontologist in the Earth sciences department at the University of Cambridge. “That’s what makes it special.”

C. fezouataensis lived on the ancient supercontinent of Gondwana, a large landmass containing parts of today’s southern continents. “You’re dealing with what was perhaps closer to what we think of being Antarctica today,” Hunter told Live Science.

The ancestor lived during the early Ordovician period (about 485.4 million to 460 million years ago) on what would have been an ancient cold-water reef, surrounded by mostly alien-looking species such as giant filter feeders called anomalocaridids. The starfish ancestor’s more modern look would have stood out in comparison.

The researchers aren’t sure what C. fezouataensis ate. Evidence of a jaw suggests that it was probably not a filter feeder like the anomalocaridids of the same period and some of today”s brittle stars. By closely analyzing the fossil, the team identified features that give clues about its ancestry.

“We sit down in a room, and we look at every single feature of the animal,” Hunter said. Then, they compared these features with those of living animals and those already identified in the fossil record. The team then used both biology and a mathematical algorithm to place these ancient starfish ancestors on a family tree.

Starfish and brittle stars are two of the five living groups that together form a larger group, or crown-group, called echinoderms. The other three are sea urchins, sea cucumbers and Crinoidea (sea lilies and feather stars). C. fezouataensis has a similar arm structure to modern-day sea lilies, which means sea lilies may trace their lineage back to this ancient ancestor species.

The new analysis showed that C. fezouataensis first appeared during an important period known as the great Ordovician biodiversification event. “It’s when life really got going in terms of being diverse, and that starfish is one of the first animals that we’d recognize today in the sea,” Hunter said.

Using C. fezouataensis as a starting point, it is now possible to link starfish-like animals from about 480 million years ago to more recent fossils and then to present-day animals.

“This is a fascinating study,” Bertrand Lefebvre, a paleontologist at the French National Centre for Scientific Research (CNRS) and Lyon University, told Live Science in an email. Lefebvre helped collect material from the site in Morocco, known for yielding exceptionally well-preserved fossils, and he also reviewed the journal article. He was not an author of the paper, however.

“This new early starfish from Morocco provides interesting glimpses on early asterozoan evolution and the origin of the echinoderm crown-group,” the larger group that includes starfish and brittle stars, as well as sea urchins, sea lilies and sea cucumbers, Lefebvre said.

But more research is needed, especially on animals of the late Cambrian period (497 million to 485.4 million years ago), to fill the gap between the earliest echinoderms and all five of the groups we see today, Lefebvre said.

Vampire squid have been lurking in the dark corners of the ocean for 30 million years, a new analysis of a long-lost fossil finds.