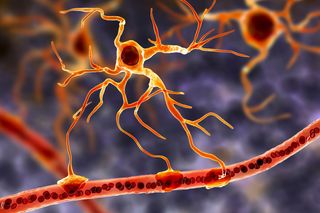 People with depression have a distinguishing feature in their brains: They have fewer astrocytes, a type of star-shaped brain cell, compared with the brains of people without mental health disorders, according to a new study.

“Astrocytes are hugely affected in depression” in terms of their cell numbers, study co-author Liam O’Leary, a doctoral candidate in the Department of Psychiatry at McGill University in Montreal, told Live Science. “It has been known before now that this happens, but we show here that it happens throughout the brain” rather than in one specific brain region. This “makes us think that this [lower astrocyte quantity] is a much bigger part of depression, one which might be amenable to new treatment strategies,” he said.

The study, published Feb. 4 in the journal Frontiers in Psychiatry, adds to a growing body of research that suggests that astrocytes may play a role in depression. Developing drugs that boost astrocyte numbers or support astrocyte functions may be a new avenue for depression treatment, the authors said.

“The promising news is that unlike neurons, the adult human brain continually produces many new astrocytes,” study lead author Naguib Mechawar, a professor in the Department of Psychiatry at McGill University, said in a statement. “Finding ways that strengthen these natural brain functions may improve symptoms in depressed individuals.”

Inside Your Brain: $22.99 at Magazines Direct

What does it really mean to be conscious? Why do we have cognitive biases when the facts contradict us? And why do some people see the world in a totally different way? In “Inside Your Brain”, you’ll explore the answers, chart the life of a pioneering neurosurgeon and relive some of the most bizarre experiments ever conducted in the endless quest to understand the brain.View Deal

“Stars” in the brain

Named for their many appendages that give them a star-like shape, astrocytes provide energy to neurons and support neurotransmission, or the relaying of brain signals, though they do not themselves send electrical signals, O’Leary said. Astrocytes belong to a group of “helper cells” in the brain known as glial cells. Scientists used to think glial cells — named after the Greek “glia,” meaning glue — just provided structural support to neurons “like a physical scaffold,” O’Leary said. “But we now realize that glia have ‘active’ roles in brain function, so they are much more than support cells.”

The first studies of the postmortem brains of people with depression found that some brain regions had fewer glial cells, though what type of glial cell was affected was unclear, O’Leary told Live Science. Later studies found that in various brain regions — such as the amygdala, hippocampus and prefrontal cortex — people with depression had a lower density of astrocytes producing a protein called GFAP, which can serve as an astrocyte marker.

To confirm that these depression-related changes affected astrocytes across the board, and not just those containing GFAP, O’Leary and his colleagues looked for a different astrocyte marker, vimentin, in the brains of people with and without depression.

The researchers labeled the two astrocyte marker proteins, GFAP and vimentin, in the postmortem brains of 10 people with depression who died by suicide and those of 10 people without psychiatric disorders who died suddenly from causes unrelated to mental health. The researchers examined three different brain regions — the prefrontal cortex, the thalamus and the caudate nucleus — that are thought to be involved in the regulation of emotions, O’Leary said. Overall, astrocyte densities were lower in the postmortem brains of the people with depression than in those without depression..

“What’s unique about this study is how many things were looked [at] at the same time and just how striking the differences were and how consistent they were,” O’Leary said. “Most studies in depression will only look at one brain region with one marker,” he said. But in the new study, the researchers investigated multiple brain regions with multiple markers, and found that “most of them had the same change, this decrease in the number of astrocytes,” he said.

“It seems that there is a pretty widespread change in those astrocytes no matter how you look at them,” said Jose Javier Miguel-Hidalgo, a professor of psychiatry and human behavior at the University of Mississippi Medical Center. Miguel-Hidalgo was not involved in the new study but authored many early papers about astrocytes and depression.

Understanding the connection between reduced astrocyte density and depression will take more research, according to O’Leary. It’s not known, for example, whether people with depression lose astrocytes over time or have fewer astrocytes to begin with, he said. “With postmortem tissue, we can only see a snapshot of the anatomy,” he added. “So the functional explanation really has to come from animal studies, which can test something and find a difference.”

A reduction in astrocytes in the brain regions studied here may have negative effects because these brain regions make up a circuit thought to be important for decision making and emotional regulation, functions affected by depression, O’Leary said. With fewer astrocytes to support them, the neurons in this circuit may not function as well as they otherwise would. Abnormalities in the prefrontal cortex also seem to be connected to impulsivity, which may play a role in suicide in some cases, O’Leary said.

Researchers hope that this new knowledge about an astrocyte-depression link could point toward future treatments for depression.

So far, no antidepressants have been developed that target astrocytes directly, O’Leary said. But some researchers believe that the drug ketamine — which can have a rapid antidepressant effect — may work in part by targeting astrocytes, he said.

What’s more, some research has found that antidepressants can boost astrocyte function and may even increase astrocyte numbers in animal models of depression, Miguel-Hidalgo told Live Science. “Can we use that information to design treatments which are specifically targeting astrocytes? The future will say, but I believe the possibility is right there,” he said.

This article was updated on Feb. 5 to remove a statement about the drug ketamine being approved for treatment-resistant depression. Ketamine itself is not approved for this use.

The coronavirus that causes COVID-19 can infiltrate star-shaped cells in the brain, setting off a chain reaction that may disable and even kill nearby neurons, according to a new study.

LSD may alter consciousness by freeing the brain from its natural barriers, allowing neurons that wouldn’t normally interact, to have unusual conversations, brain scans show.

Our brains need sleep to work properly. But it turns out you don’t need a brain to sleep.