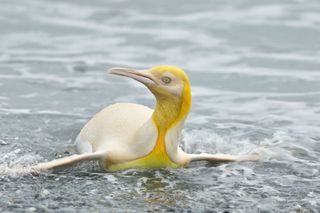 Black-and-white tuxedos may be the conventional dress code in the penguin world, but one dashing individual is breaking the status quo with an à la mode yellow coat.

A wildlife photographer captured images of the rare penguin on a remote island in South Georgia in December 2019 and only recently released the photos. A king penguin “walked up straight to our direction in the middle of a chaos full of sea elephants and Antarctic fur seals, and thousands of other king penguins,” the photographer from Belgium, Yves Adams wrote on an Instagram post. “How lucky could I be!”

At the time, Adams was leading a two-month photography expedition through the South Atlantic and had stopped on a South Georgia beach. While unpacking safety equipment, he saw a fluttering of penguins swimming toward the shore — one individual immediately caught his eye.

“I’d never seen or heard of a yellow penguin before. There were 120,000 birds on that beach, and this was the only yellow one there,” Adams told Kennedy News and Media. “We all went crazy when we realized. We dropped all the safety equipment and grabbed our cameras.”

King penguins (Aptenodytes patagonicus), just like the closely related emperor penguins (Aptenodytes forsteri), typically adorn a black-and-white coat with a yellowish-gold dash of color on their collar. The yellow pigments are “unique to penguins,” though not all species have them, according to the Australian Antarctic Program.

This particular penguin seems to have retained its yellow feathers but lost its dark ones, which are typically colored by a blackish brown pigment known as melanin.

Penguins with unusual plumage are relatively rare, and sometimes it can be difficult to identify the cause behind the rare colors just by looking at the penguins, according to the Australian Antarctic Program. Some unusual coloring can be due to injury, diet or disease, but many instances are due to mutations in the bird’s genes. Such mutations can cause, for example, “melanistic” penguins whose typically white parts are black and “albinistic” penguins that don’t have any melanin and thus are white.

Adams told Kennedy News that the yellow bird has a genetic condition known as leucism in which only some of the melanin is lost.

Dee Boersma, a conservation biologist and professor at the University of Washington who was not a part of the expedition, agreed. “This penguin is lacking some pigment so it is [leucistic],” Boersma told Live Science in an email. “True albinos have lost all pigment.” (Boersma said the bird has a brown head and so must have retained some of the pigment.)

“I wouldn’t call the bird leucistic,” because the penguin seems to lack all melanin, said Kevin McGraw, an integrative behavioral ecologist at Arizona State University, who also wasn’t part of the expedition.

“It does look albino from the perspective that it lacks all melanin” in its plumage, feet and eyes, McGraw said. Still, “we’d need feather samples for biochemical testing if we aimed to unequivocally document,” whether melanin is present, he said.

Animals can be albino but still have non-melanin pigment, he added.

Such oddly colored birds are rare — and likely for a reason.

Penguins use body and plumage color for a variety of functions, including mate selection, camouflage or protection from the sun, McGraw said. “It’s conceivable that such color aberrations could impact both survival and reproduction.”

The team was lucky that the yellow penguin landed close enough that they were able to “get this show of a lifetime,” Adams said. “Our view wasn’t blocked by a sea of massive animals. Normally, it’s almost impossible to move on this beach because of them all.”

Categories: News
Tagged: according to the Australian Antarctic Program, genes, penguin, protection from the sun, wrote on an Instagram post

If you’ve ever lost track of your friends in a crowd, you’ll likely empathize with the endearingly “confused” rockhopper penguin in a recent viral video.…

The world’s largest iceberg has shattered into a dozen pieces, the U.S. National Ice Center (USNIC) reported on Sunday (Jan. 31), bringing the colossal object a few leaps closer to its total destruction. Thousands of local penguins have breathed a sigh of relief.

This season’s new Christmas hero — a tiny owl stowaway that survived the long drive from upstate New York to Rockefeller Center in Manhattan on a Norway spruce — won’t be taken back to his former home to be released back into the wild.

A tangled mass of what looked like discarded yellow rope recently washed up on a beach in Texas. But this peculiar knotty pile wasn’t garbage. It was a colorful sea whip — a type of soft, flexible coral.