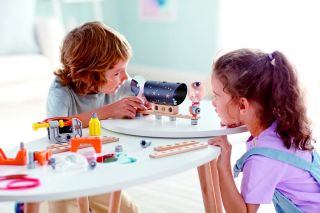 If you have a child who loves to dig up bugs, build rolling robots, or is just curious about how things work, one of these science kits may be for you. Here’s a look at what is on sale for Black Friday.

Kids can play “chemist” with all the ingredients to create their own lab and conduct experiments. With the included beakers, test tubes, flasks, pipettes and more, they will be able to whip up glowing slime, fizzing reactions and oozing bubbles, as well as try their hands at colorful chromatography and more. This chemistry kit, recommended for ages 6 and up, includes 10 printed experiment cards that clip onto the lab station as well as a 16-page, full-color manual with additional experiments and scientific explanations.View Deal

Have a kid who can’t get enough of the outdoors and digging in the dirt? Uncle Milton’s Ant Farm would be the perfect gift: They can watch live ants dig tunnels, build bridges, move “mountains” and more. For kids 6 and up, the kit includes a STEM learning guide to help children learn about amazing behavior and anatomy of ants. Don’t worry about any insect escapees, as there’s a self-locking device on the farm that still allows access for feeding and giving water to the teensy inhabitants. Amazon is selling the kit for 22% off.View Deal

Inside this container is a tiny world: a miniature garden that can be illuminated at night by a built-in LED light. The kit includes colored sand, rocks and soil; wheatgrass and chia seeds; whimsical miniatures of a mushroom and rabbit; and tools for planting and watering the seeds.

Amazon is offering the kit for 27% off.View Deal

Kids will have a blast, literally, with the more than 26 explosive kitchen experiments. While they are creating bubbly, frothy concoctions, your child will also be learning about acids, bases, pH scale, DNA, electricity and diffusion. In addition to ingredients and tools, this science kit, recommended for ages 8 and up, also includes fact-filled colorful lab guide is full of pictures and information giving kids hours of fun in their own science lab.

NOTE: The reviews on Amazon appear to be mostly fake, though other reviews of the set suggest it’s a solid science kit for kids.View Deal

Embrace your inner 007 and learn about science, with this kit, which offers two exciting mysteries to solve using eight scientific activities. Learn about how crime labs work as you match fingerprints, analyze DNA and test liquids and powders. Recommended for ages 8 and up. And right now, Amazon is selling the kit for 27% off.View Deal

Kids as young as 6 can learn about computer coding with this Playz science kit. With the kit and instruction book, your child can create and play with binary necklaces, ancient encryption devices, sorting races, mystery mazes, pixelated pictures and more. Right now, Amazon is offering the kit for 38% off.View Deal

Your child can pretend to be a chemist and learn real science while mixing up the perfect slime concoction. This kit includes 18 different colored slimes, three cutting/shaping utensils, two plastic straws, 12 vials of colored glitter, two bags of sugar paper, three bags of beads and six bags of foam balls. Kids can even add a sprinkle of special powder to make their slime glow in the dark.

Amazon is offering the kit for 40% off.View Deal

Did you know that you can generate electricity with fruits or vegetables? This 4M kit provides everything you’ll need (except the produce) to turn a potato into a working battery that can power an electronic clock: a digital clock, wires and prongs.

Right now, Amazon is offering the kit for 30% off.View Deal

You won’t believe your eyes when you peer at all of the optical creations in this science kit. Kids ages 4 and up can conduct eight optical science experiments that involve creating: a periscope, a cone Illusion, a 3D viewer, a rotating kaleidoscope, an Infinity mirror, an optical lab, an optical illusion pendulum and a camera obscura.

Amazon is offering the kit for 22% off.View Deal

Reach for the stars with a kit for making and launching your own rockets. Along the way, kids will learn about propulsion and spaceflight. The included guide walks kids through different careers connected to rocket propulsion, along with step-by-step instructions for completing several rocket experiments. (Some household items are not included.) Kit is recommended for children ages 8 to 12.

Amazon is offering the kit for 20% off.View Deal

Inside this container is a tiny world: a miniature garden that can be illuminated at night by a built-in LED light. The kit includes colored sand, rocks and soil; wheatgrass and chia seeds; whimsical miniatures of a mushroom and rabbit; and tools for planting and watering the seeds.

For Black Friday, Amazon is offering the kit for 19% off. View Deal

If you’ve got a little scientist on your hands, look no further for the best science kits this holiday season. Live Science has gathered a group of the most incredible science kits you can buy right now. Is your kid fascinated by the weather? There’s a science kit for that. Do they want to know how plants grow? Get them a glow-in-the-dark terrarium. Are they always talking about squishy, gross guts? Maybe they’d like an anatomically accurate model of just where guts go in the human body and how they keep us alive. No matter your kids’ science interests, we have a kit for them.

Check out these fun gifts for the curious kids in your life. From STEM toys that promote the inner engineer to hands-on kits to help unlock your child’s creativity, here are some of Live Science’s favorite gift ideas for kids.

Introduce your kid to the wonders of autonomous vehicles with the Sphero RVR, a programmable and drivable robot that is on sale for 18% less at Amazon.

Young children who are just starting to explore the world around them often have plenty of questions, and a new animated series from PBS Kids not only encourages endless questions, but it also shows youngsters how they can use science to find answers.

If your curious kid is already developing a fascination for science (and exploring the world around them), having their own microscope opens the door for all kinds of fun experiments — from inspecting backyard flora to scrutinizing itty-bitty bugs. Let’s go exploring!