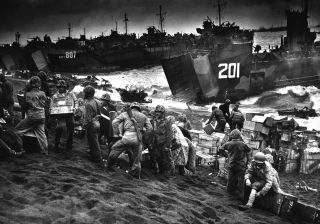 The Battle of Iwo Jima took place in 1945 during the final months of World War II. To this day, it is considered one of the most iconic clashes of the so-called Pacific campaign, or Pacific War — when American forces and their allies fought against Imperial Japan across the vast Pacific Ocean.

A hallowed event in American military history, Iwo Jima has come to epitomize the fighting spirit of the U.S. armed forces, particularly the Marine Corps.

The Battle of Iwo Jima lasted five weeks, from Feb. 19 until March 26, 1945, when U.S. forces secured the island. The battle saw some of the fiercest combat in the Pacific theater, with nearly 7,000 U.S. Marines killed and another 20,000 injured, according to The National WWII Museum. The battle took place in the shadow of a huge mountain and on beaches of black volcanic ash.

Where is Iwo Jima?

During WWII, the commander of the 22,000-strong Japanese garrison, Gen. Tadamichi Kuribayashi, transformed the island into a fortress. In the winter of 1944 to 1945, he installed pillboxes, bunkers, tunnels, trenches and fortified caves. These defenses added to the hundreds of artillery pieces already installed on Iwo Jima.

Iwo Jima was targeted by the Americans as part of the Allies’ “Island Hopping” strategy, in which they would invade an island, establish a military base there and then launch an attack on another island. As such, Iwo Jima was considered a stepping-stone for the invasion of mainland Japan.

How the battle went down

The U.S. committed 110,308 military personnel to the battle, from naval and air crews to the Marines. The American forces also included 17 aircraft carriers and 1,170 aircraft, according to the U.S. Department of Defense.

The Americans were aware of the Japanese fortifications on the island, but President Franklin D. Roosevelt refused to authorize the use of poison gas shells, which could possibly have made the island easier to secure. A conventional, but heavy bombardment began in the weeks before the battle, but it had little effect.

The first wave of U.S. Marines approached the beach of Iwo Jima at 8.30 a.m. local time on Feb. 19, 1945. The lead landing craft strafed the beaches with rocket and cannon fire, with supporting fire from air and naval forces.

However, when amphibious vehicles came ashore, they quickly became bogged down in the steep volcanic sand. The Marines were pinned down on the increasingly crowded beaches and were exposed to attack from artillery placed on Mount Suribachi, as well as machine guns from pillboxes just inshore.

War in the Pacific: $26.99 at Magazines Direct
The war in the Pacific pitted the Allies against a ferocious opponent in Japan, a nation determined to forge its own empire and fight to the last man rather than surrender. Meet some of the courageous veterans who faced the ruthless Imperial army, witness the naval clashes that ultimately settled the conflict, as well as the destruction of the nuclear bomb.View Deal

The Marines were forced to shelter where they could, in shallow foxholes and among the wreckage of burning vehicles. The Americans suffered almost 2,500 casualties on the first day. Nevertheless, 30,000 were able to reach the shore, and over the following few days, the battle concentrated on Mount Suribachi, which the Americans captured on Feb. 23, according to the book “Battle: A Visual Journey Through 5,000 Years of Combat” by R. G. Grant (DK, 2005).

Despite the capture of Suribachi, the Americans had taken only the southern part of Iwo Jima. They spent months inching north to conquer the whole island. The Japanese used the rocky terrain to hide and prepare ambushes, which hindered the Marines’ progress. The battle ended on March 26, 1945, when U.S. forces declared they had secured the island.

Casualties and recognition of bravery

Of the original Japanese garrison of 22,000, approximately 20,000 were killed or missing in action, including Gen. Kuribayashi, whose body was never recovered. Only 1,000 surrendered, which was a large number for Japanese forces. While many chose to commit suicide rather than be captured alive, many soldiers were too badly injured or too ill to do so.

By contrast, there were over 26,000 American casualties, with 6,821 killed. Of this number, 5,931 were Marines, or twice as many as were killed during World War I, according to the text “War From Ancient Egypt to Iraq” edited by Saul David (DK, 2009).

Despite the sacrifice, a large part of the American success on Iwo Jima was due to the heroism of individual soldiers. A total of 27 Medals of Honor were given for acts of extreme courage during the battle. Five were presented to naval personnel, while the remaining 22 medals were given to U.S. Marines, many of them posthumously.

As of February 2020, the only recipient still alive on the 75th anniversary of the battle is Hershel W. Williams.

The bravery shown on Iwo Jima was neatly summarized by the commander in chief of the U.S. Pacific Fleet, Adm. Chester W. Nimitz, who said, “Among the men who fought on Iwo Jima, uncommon valor was a common virtue.”

On Feb. 23, 1945, during the Battle of Iwo Jima (Feb. 19 to March 26), six Marines planted the U.S. flag at the summit of Mount Suribachi. The scene was photographed by journalist Joe Rosenthal of the Associated Press and his image soon became famous around the world. What many people do not know is that this iconic photo actually shows the second flag to be raised on Iwo Jima that day. 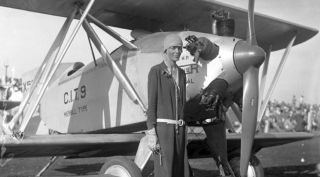 Researchers at Penn State are subjecting an old, worn sheet of aluminum to a particle beam from the heart of a nuclear reactor in the hopes of cracking the mystery of Amelia Earhart‘s disappearance.

A massive “cursus” monument, a site for ancient rituals, that was built around the same time as Stonehenge, has been discovered on the  Scottish Isle of Arran.