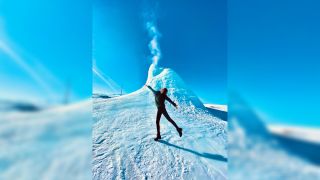 A visitor standing in front of the ‘ice volcano’ in Kazakhstan.
(Image credit: @himmelvind)

A lofty “ice volcano” has popped up in southeastern Kazakhstan, where the hollow cone is erupting with sprays of spring water that freeze into teensy ice crystals that fall again onto the brilliant-white cone.

The ice structure sits on top of a hot spring, according to Business Insider, which sprays water out of the top like an erupting volcano. It is not actually a volcano, which forms through the eruption of lava, ash and gases, but the buildup of frozen spring water means the structure reaches an impressive height of 45 feet (13.7 meters), according to Business Insider. As such, the tower of ice is sometimes called an ice volcano.

The ice structure, located near the village of Kegen in Kazakhstan’s Almaty region, is a popular attraction among residents of there, according to the Kazakhstan travel and news website Tengri Travel, and visitors have been posting images of themselves next to it on Instagram.

The term “ice volcano” is usually given to similar ice structures that can appear around the edges of large bodies of water, such as lakes, rather than on hot springs as the Kazakhstan one has, Live Science previously reported.

They form in freezing temperatures when waves create enough pressure to crack the surface ice along a coastline and force a spurt of water out, which then freezes to create a cone, Live Science previously reported.

Ice volcanoes formed along the edge of Lake Michigan last February when wind conditions were ideal for forcing waves underneath the shoreline ice. “It’s almost a ‘Goldilocks’ situation where you need just the right conditions over a period of time to get these [formations] to develop,” Matt Benz, a meteorologist for AccuWeather, said in a news report at the time.

On Earth, some organisms like it hot, some like it cold, and others feel at home only among the scalding acid jets of an undersea volcano.

Scientists boring more than a mile deep into Antarctic ice have unearthed a mineral that’s rarely seen on Earth but found in abundance on Mars,…