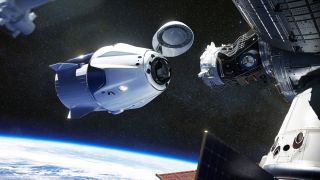 The astronauts, collectively known as Crew-1 — Michael Hopkins, Shannon Walker and Victor Glover of NASA and Soichi Noguchi of the Japanese Space Agency (JAXA) — were also the first full mission crew to be transported into orbit by a private company. (A smaller demonstration mission to the ISS, crewed by just two astronauts who stayed in space for a short while, preceded Crew-1 by several months.) Crew-1 arrived aboard a SpaceX Crew Dragon capsule launched into orbit by a SpaceX Falcon 9 rocket, from the Kennedy Space Center in Florida on Nov. 15, Live Science sister site Space.com previously reported.

On Sunday (Feb. 7), the Crew-1 astronauts took their place in the history books after spending their 85th day aboard the ISS, according to NASA.

The previous record of 84 days was set in 1974 by the Skylab 4 crew, the final mission aboard NASA’s first space station Skylab. Since then, other duration record-breaking astronauts have all been part of missions launched from other countries. SpaceX’s Crew-1 is the first manned mission to launch from the U.S. since the space shuttle was retired in 2011, according to NASA.

NASA took to Twitter to celebrate the achievement, which happened to coincide with Super Bowl LV in Tampa, Florida.

The Crew-1 astronauts will almost certainly extend their record as they complete their six-month stay on the ISS. The next crewed SpaceX mission is expected to launch in April when Crew-2 heads into orbit to replace their predecessors, according to Space.com.