A photographer captured mesmerizing footage of a soap bubble freezing over and transforming into a delicate snow globe after temperatures plunged in Winnipeg, Canada.

The stunning footage was captured by Heather Hinam, a Canadian naturalist, artist, photographer and educator. She shared the video on Twitter, noting that “Cold, clear days with very little wind are great for freezing bubbles.”

“This morning’s -28 C [minus 18.4 degrees Fahrenheit] had me out in the backyard with the good camera, the bubble solution and the tripod,” Hinam wrote. “Here’s a frozen moment of zen for your afternoon.”

In the video, Hinam uses a clear tube dipped in soap to blow a bubble onto a snow-covered surface. As the bubble gently jiggles to and fro, pinpricks of ice begin to speckle the soap film; these pinpricks grow steadily larger, forming iridescent patches of ice crystals. Each icy patch contains dazzling textures, similar to a snowflake, and as the patches grow larger, they eventually merge into each other and form a complete sphere.

The effect is striking — but how does it work? The phenomenon once puzzled scientists, but in 2019, a group of physicists figured it out and published their findings in the journal Nature Communications.

The biggest mystery was how multiple patches of ice form on soap bubbles, rather than the ice seeding from just one big patch that expands to cover the whole sphere. Usually, when a small amount of liquid freezes, the freezing process begins at a single origin point; that frozen area then cools the liquid adjacent to it, and so on until all the liquid cools and freezes, Nova reported. This process governs how an ice cube would form in your freezer, for example.

Bubbles follow that rule, at first, but quickly deviate from the pattern, the authors of the 2019 paper found.

In a freezing environment, a single point on the bubble begins to freeze first, as with an ice cube. As that spot freezes, molecules in the liquid water rearrange themselves and fuse to become a solid, and this rearrangement releases a small amount of energy in the form of heat.

But because a bubble is a hollow sphere, that heat dissipates into the remaining liquid water and causes it to flow toward the top of the bubble. As more of the bubble freezes, more heat gets released and the flow of water grows stronger. This causes ice crystals to chip off the frozen bits of the bubble and go careening across its surface. Each of these crystals forms its own ice-seeding colony, which grows larger, creating the fascinating “snow globe” effect.

If you want to try freezing bubbles for yourself, wait until the temperature falls below freezing and blow the bubbles up into the air; that way the bubbles will freeze before they hit the ground, Live Science previously reported. The colder it is outside, the better the trick works. 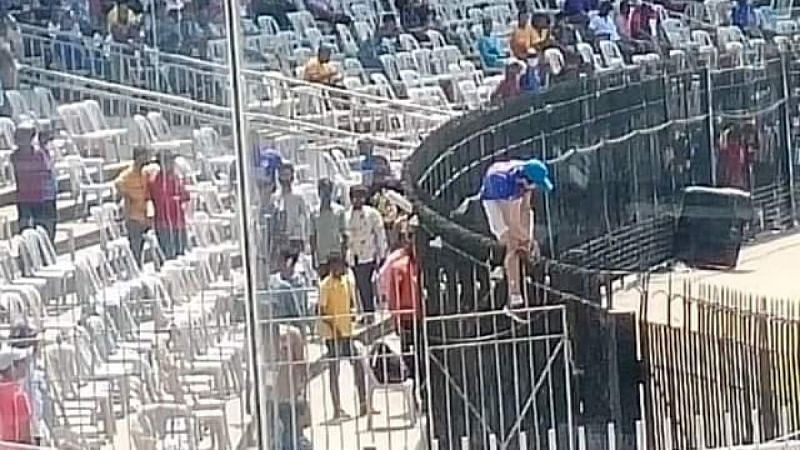 A spectator viewing the India vs England Test breached the bio-secure bubble during the lunch break on day 3. A young fan was seen coming down from the stands and over the boundary rope as he ran in to shake hands with the England players. Off-spinner Ravichandran Ashwin on Saturday said that bio-bubbles in place due to COVID-19 risks have actually helped the team bonding between Indian cricketers.

Oklahomans came face-to-face with popsicle-like alligators — reptiles whose snouts were sticking straight out of the icy water — when the cold snap hit the American South this month.