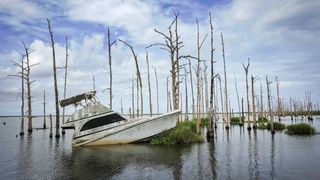 Sea levels will probably rise faster than most climate models predict, according to a new study.

In 2019, the Intergovernmental Panel on Climate Change (IPCC), a United Nations scientific body that reports on climate change, said that the global sea-level average would likely rise at least 2.00 feet (0.61 meters) by the year 2100, but no more than 3.61 feet (1.10 m). Those numbers come from models that account for climate change and ocean heating, ongoing greenhouse gas emissions and potential changes in human behavior to prevent more warming.

In this new study, researchers examined models of sea level through the lens of historical data. They looked at how fast sea levels rose in the past as Earth warmed and extrapolated to predict sea-level rise forward in time. They found that existing sea-level models tend to lowball sea-level rise when compared with more straightforward extrapolations from the historical record.

“This comparison suggests that the likely upper level of sea-level projections in recent IPCC reports would be too low,” the researchers wrote in a paper published Feb. 2 in the journal Ocean Science.

Current climate models account for factors like changes in ice and cloud cover, the amount of the sun’s heat absorbed by oceans, and all sorts of other physics. But they do take historical data into account, said Kaitlin Hill, a Wake Forest University mathematician who works on climate modeling, who was not involved in the IPCC report or the new paper.

“If you made a good climate model, then if you put all the physical processes that you can think of into it and ran it for the same period of time that we have historical data, it should roughly replicate [what really happened],” Hill told Live Science.

This process, sometimes known as “hindcasting,” is a key test of a model’s usefulness.

Joellen Russell, an oceanographer at the University of Arizona (also not involved in this latest paper), said that it’s not surprising to find that crucial climate models used by the IPCC might underestimate sea-level rise. Other models have been shown using hindtesting to underestimate historical sea-level rise as well. Experts already tend to predict a level of sea-level rise that’s well beyond what the IPCC predicts — and more in line with what this new method for studying future sea-level rise would suggest.

And existing models don’t account for the effects of ice-sheet melting on sea-level rise, Russell added. (The IPCC’s “Special Report on the Ocean and Cryosphere” also noted this limitation.)

The Ocean Science authors developed a new metric for assessing sea-level rise, known as transient sea level sensitivity (TSLS), which aims to  ground sea-level predictions in historical reality. TSLS could improve future sea-level change models, the authors argued. The best way to make projections with TSLS would require more information about the IPCC’s models than has been made available, they said.

Russell said TSLS represents an “important step forward” for the field.Young Gu Her, a hydrologist at the University of Florida who works with climate models, said that the result is interesting and demonstrates the importance of understanding assumptions of models used to predict future sea-level rise. But he said the paper didn’t clarify how much more greenhouse gas emissions (and how much warming) they were assuming would come in the next century.

It’s important for the public to understand that climate models don’t work like weather forecasts, Hill said. They aren’t designed to tell you what the temperature is going to be on a Tuesday ten years from now. They’re designed to help people understand what is happening in the global climate, what factors are most important in shaping the future, and how that future might be changed.

“The other thing this type of research reminds us of is that upper bounds predicted by the IPCC should not be interpreted as the ‘most possible’ sea-level rise,” Andra Garner, a climate scientist at Rowan University, in New Jersey, told Live Science. “Upper bounds from the IPCC reports are typically defined as the 83rd percentile,” meaning that the IPCC’s highest sea level number is actually the point that 83% of possible outcomes fall below, “while, as the author notes, this means that higher sea-level rise is deemed less likely, it is not considered to be impossible or otherwise out of the question.”

Atmospheric carbon dioxide (CO2) concentration will soar past a scary threshold this year, exceeding 417 parts per million (ppm) —  a 50% increase since the start of widespread industrial activity in the 18th century.