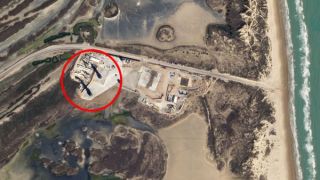 A SkySat satellite operated by the San Francisco-based company Planet captured high-definition satellite images of Starship SN9 at the company’s South Texas site, near the Gulf Coast, hours before the launch. The company’s fleet of SkySats includes 21 individual machines in varying orbital locations, allowing for revisits of an imaging area roughly five to 10 times a day, Planet said on its website.

“SN9’s sister ship is visible slightly above and to the right, and the landing pad is the concrete square closer to the beach,” Planet wrote in a photo caption. “This high-resolution SkySat image reveals details of the test facility, even the color of individual cars and trucks parked nearby.”

The Starship flight — which is under investigation by the Federal Aviation Administration after the FAA said the event violated a launch license — took place near the small community of Boca Chica Village. The 165-foot (50 meters) prototype went through much of its flight plan, including shutting down its three Raptor engines and making it to the target altitude of roughly 6.2 miles (10 kilometers).

SN9 also did a complicated horizontal flip that it would need to do during an optional reentry in Earth’s atmosphere after an operational spaceflight. But it couldn’t stick the landing and exploded into a fireball, similarly to predecessor SN8’s fate on Dec. 9.

“We got a lot of good data, and the primary objective — to demonstrate control of the vehicle in the subsonic re-entry — looked to be very good, and we will take a lot out of that,” SpaceX principal integration engineer John Insprucker said during SpaceX’s launch webcast, while admitting the landing sequence will need more work.

And at an oblique angle just for fun 🙂 pic.twitter.com/aQQOQ1gVfSFebruary 3, 2021

SN9 is the latest in a series of Starship prototypes in support of SpaceX’s eventual goal of sending settlers and supplies to Mars. Another flight version, SN10, is about to start prelaunch testing.