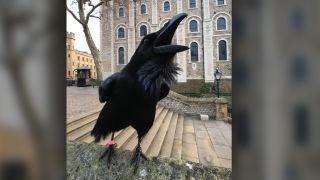 Merlina, a female raven (Corvus corax), joined the corvid community at the tower in 2007, and has reigned since then as “the ruler of the roost,” tower representatives tweeted in a thread on Jan. 13.

But Merlina, one of seven royal ravens in the tower, has been missing for several weeks, “and her continued absence indicates to us that she may have sadly passed away,” representatives wrote in one of the tweets.

The Tower of London, in the United Kingdom, is a lofty fortress built by William the Conqueror; he began its construction in the 1070s, and other monarchs further enlarged and reinforced the building, according to the U.K. website Historic Royal Palaces (HRP). Inside its fortified walls, Britain’s kings and queens have imprisoned traitors to the crown; staged executions; stockpiled weapons; and hoarded precious jewels.

They also created a home there for a small group of ravens (the birds have been known collectively as “an unkindness” since at least 1486, when the term was published in “The Book of St. Albans,” according to Merriam-Webster). Lore dating to the days or Charles II — King of Scotland, England and Ireland from 1660 to 1685 — states that six ravens must live in the tower at all times, and “the crown and the Tower itself would fall if they left,” according to HRP.

Today, there are seven ravens residing there; six “official” birds, and one spare, HRP says. Merlina, along with Erin, Grip, Harris, Jubilee and Poppy, occupied lodgings in the Tower’s South Lawn (the so-called spare raven is not named on the HRP website). One of the Tower guards, known as a Beefeater or a Yeoman Warder, is also the designated Ravenmaster, tasked with caring for the birds. Christopher Skaife is the current Ravenmaster, feeding his charges blood-soaked dog biscuits “as a special treat;” settling flock-based feuds; and foiling escape attempts, the Audubon Society wrote in a profile in 2018.

Merlina was “a free-spirited raven,” and she went missing around Christmastime, Skaife told BBC News on Jan. 14. Feathers in the wings of Tower ravens are regularly trimmed to keep the birds close to home, though the birds are still able to fly short distances. Despite these precautions, some of the more adventurous ravens still manage to stray too far, HRP representatives said.

“There is a long and storied history of the ravens being spotted out and about around the local area, including a pair who used to nest at St Paul’s Cathedral,” HRP representatives told Live Science in an email. “In 2011, one of the current ravens — Munin — reached as far as Greenwich [5 miles or 8 kilometers from London], before being returned a week later. However, the ravens generally choose to stay at the Tower, where they are incredibly well-fed and cared for by the Ravenmaster and his team,” they said.

“She will be greatly missed by her fellow ravens, the Ravenmaster and all of us in the Tower community,” tower representatives tweeted.

Unusual weather blanketed the Acropolis with snow on Tuesday (Feb. 16), turning the iconic site in Athens into a scene from a holiday card.

They’re up there with double-decker buses, red phone booths and Big Ben when it comes to quintessentially British things, but the uniforms sported by Queen Elizabeth II’s guards weren’t designed to look aesthetically pleasing. They were devised as essential accoutrements of battle against the United Kingdom’s enemies during the 1800s.

One tourist has died and three others were hospitalized with severe injuries after the collapse of an enormous frozen waterfall in eastern Russia on Thursday (Jan. 7), according to news reports.