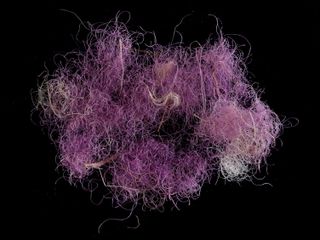 Archaeologists have uncovered rare fragments of 3,000-year-old textiles stained purple — a color considered the height of royal fashion at the time — in southern Israel.

The archaeologists discovered the purple textiles — which included bits of woven fabric, a tassel and a bundle of wool fibers — at Slaves’ Hill in Timna Valley, an ancient copper production district in the Arava desert, the team wrote in a new study describing the findings.

Radiocarbon dating of the fabrics revealed that they were woven around 1000 B.C., placing them in the time of the biblical kings David and Solomon — who ruled from 1010–970 B.C. and 970–931 B.C., respectively — in Jerusalem. The Bible mentions the kings and other important figures wearing the color during this time, according to the researchers.

The dye used to stain the fabrics was made from mollusks found hundreds of miles away in the Mediterranean and was extremely valuable as a result. However, until now, no physical evidence of its use had ever been recovered in Israel or the rest of the southern Levant (an area encompassing the eastern Mediterranean).

“For the first time, we have direct evidence of the dyed fabrics themselves, preserved for some 3,000 years,” Naama Sukenik, curator of organic finds at the Israel Antiquities Authority and lead author of the new paper describing the textiles, told Live Science in an email. “Each fragment gives us new information, tells us a new story about the site and important information about the people that lived there.”

The purple textiles were uncovered at a place called Slaves’ Hill, which was home to highly skilled metalworkers. The unusually dry climate at the site helped to preserve what is now considered the largest collection of ancient textiles ever found in Israel.

“Textiles are rare in the archaeological record,” Sukenik told Live Science. “Like any perishable organic material, they are usually subject to rapid decomposition, and their preservation requires special conditions to prevent destruction by microorganisms.”

Although researchers have recovered lots of textiles from Timna Valley, most of them are uncolored or dyed with less-valuable colors. The new findings are the only known examples of fabrics stained true purple that have been found in the southern Levant.

“The color immediately attracted our attention, but we found it hard to believe that we had found true purple from such an ancient period,” study co-author Erez Ben-Yosef, an archaeologist at Tel Aviv University, said in a statement.

How the valuable purple fabrics ended up at Slaves’ Hill is a mystery, but people might have traded them for copper produced at the site, the researchers suggested.

At the time of the textiles’ creation, the only way people could obtain the true-purple dye, known as argaman, was by extracting it from specialized glands in the bodies of any of three species of mollusk found in the Mediterranean: the banded dye-murex (Hexaplex trunculus), the spiny dye-murex (Bolinus brandaris) and the red-mouthed rock shell (Stramonita haemastoma), according to the researchers.

When left in sunlight, the dye also changes color and turns into a light blue or azure, known as tekhelet, which was another popular dye among nobility at the time.

The researchers’ analysis of the dye from the Timna textiles allowed them to recreate argaman and tekhelet dyes employing the same techniques Mediterranean workers used 3,000 years ago, thereby confirming that the dyes had originated there.

“The practical work took us back thousands of years,” study co-author Zohar Amar, an archaeologist at Bar-Ilan University, said in the statement. “It has allowed us to better understand obscure historical sources associated with the precious colors of azure and purple.”

The complexity of making the dye and having to transport it hundreds of miles to the Middle East is what made it so luxurious during the time of David and Solomon and explains why the color was a symbol of high economic and social status.

“The gorgeous shade of the purple, the fact that it does not fade and the difficulty in producing the dye all made it the most highly valued of the dyes, which often cost more than gold,” Sukenik said.

The research is part of the Central Timna Valley Project, a large-scale excavation that has been ongoing since 2013. The new study was published online Jan. 28 in the journal PLOS One. 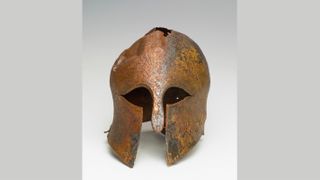 A well-preserved ancient Greek helmet likely worn by a soldier during a war with the Persians has been found in Haifa Harbor in Israel.