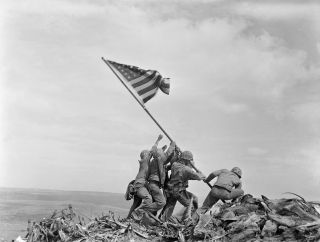 Raising the Flag on Iwo Jima, by Joe Rosenthal. This photo documents the second U.S. flag to be planted atop Mount Suribachi on Feb. 23, 1945, during the Battle of Iwo Jima. The photo quickly became famous worldwide and to many, symbolized the resilience of the U.S. Marines during World War II.
(Image credit: Joe Rosenthal/Public Domain)

On Feb. 23, 1945, during the Battle of Iwo Jima (Feb. 19 to March 26), six Marines planted the U.S. flag at the summit of Mount Suribachi. The scene was photographed by journalist Joe Rosenthal of the Associated Press and his image soon became famous around the world. What many people do not know is that this iconic photo actually shows the second flag to be raised on Iwo Jima that day.

Who raised the first flag on Iwo Jima?

Located on the southern tip of the Japanese island, Mount Suribachi is a dormant volcano that is 546 feet (166 meters) high. The summit has a dominating view of the rest of Iwo Jima, including its black sand beaches. During the battle, one of the bloodiest in the Pacific theater, Japanese forces used this vantage point to direct artillery fire onto the American forces. Soon after the start of the battle, the Americans aimed to capture the position.

A 40-man combat patrol, led by 1st Lt. Harold G. Schrier, was the first American unit to reach the summit of the mountain on Feb. 23. These men were from the 2nd Battalion, 28th Marines, and they carried with them a U.S. flag taken from the USS Missoula, a tank transport ship that delivered troops and cargo to Iwo Jima. Earlier, Schrier had been handed the flag by his batallion’s adjutant and was told, “If you get to the top, put it up.”

The flag from the USS Missoula was raised by Schrier and two other Marines at around 10:30 a.m. local time.

“The best memory I’ve got is the day that we gave a flag off our ship to a lieutenant. That was the first flag that went up on Mount Suribachi,” said Tom Price, a U.S. Navy veteran who was serving on the USS Missoula during the battle, and shared his memories of it with magazine in January 2020.

War in the Pacific: $26.99 at Magazines Direct
The war in the Pacific pitted the Allies against a ferocious opponent in Japan, a nation determined to forge its own empire and fight to the last man rather than surrender. Meet some of the courageous veterans who faced the ruthless Imperial army, witness the naval clashes that ultimately settled the conflict, as well as the destruction wrought by the most fearsome weapon ever made.View Deal

“We watched them go up the mountain and raise the flag about 500 yards [457 meters] from the ship. There were hundreds of ships and everyone blew their sirens and horns. Everybody cheered and it was really something because the flag from the Missoula was the very first to be raised on Japanese territory,” Price said. “We were very proud.”

Staff Sgt. Louis R. Lowery, who was a photojournalist working for the armed forces magazine Leatherneck, photographed Schrier and his men at the summit of Suribachi.

Who raised the second flag?

The original flag planted by Schrier was considered too small to be easily seen from the northern side of the Suribachi, so the Marines searched for a replacement. According to historian Robert E. Allen’s book “The First Battalion of the 28th Marines on Iwo Jima” (McFarland, 1999), the flag shown in Rosenthal’s famous photograph was delivered by Tank Landing Ship USS LST-779, and measured 56 inches by 96 inches (142 centimeters by 244 cm).

According to recent research, the men pictured in the photograph are: Harlon Block, Harold Keller, Ira Hayes, Harold Schultz, Franklin Sousley and Michael Strank. Rosenthal quickly photographed the Marines using his Speed Graphic camera, without the aid of a viewfinder. At the time, he did not realize the significance of the photograph.

Tragically, Block, Sousley and Strank were later killed in action during the battle. However, the three surviving servicemen returned home to a hero’s welcome and immediately toured across the U.S. in support of the Seventh War Loan (bonds issued by the government to finance war operations). According to Robert S. Burrell in his book “The Ghosts of Iwo Jima” (Texas A&M University Press, 2006), the Seventh War Loan, with support from the touring Iwo Jima survivors, raised a record-breaking $26 billion for the war effort.

Burrell also explains that after the battle, “the [Marine] Corps mistakenly identified one of the dead Marines in the photo… Harlon Block had been misidentified as Hank Hanson.” This was not the only mistaken identity, however. In October 2019, evidence brought forward by historians identified Harold Keller as the figure at the far side of the flagpole, previously believed to have been Rene Gagnon.

By the end of World War II, Rosenthal’s photograph had become famous worldwide. The photograph, which won the Pulitzer Prize in 1945, served as inspiration for the United States Marine Corps War Memorial, in Arlington Ridge Park, Virginia. The memorial was unveiled on Nov. 10, 1954, in the presence of President Dwight D. Eisenhower. In 1961, President John F. Kennedy proclaimed that the U.S. flag should fly over the memorial 24 hours a day.

The Battle of Iwo Jima took place in 1945 during the final months of World War II. To this day, it is considered one of the most iconic clashes of the so-called Pacific campaign, or Pacific War — when American forces and their allies fought against Imperial Japan across the vast Pacific Ocean. 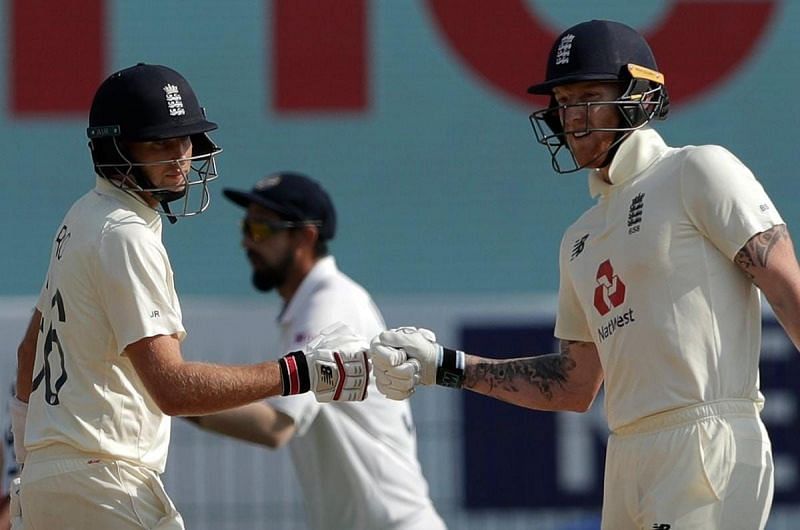 Brushing aside claims of India dishing out spin-friendly pitches on purpose, England all-rounder Ben Stokes stated a Test player should be equipped to tackle any situation. He added both India and England, like other cricket-playing nations, come with their own set of challenges.