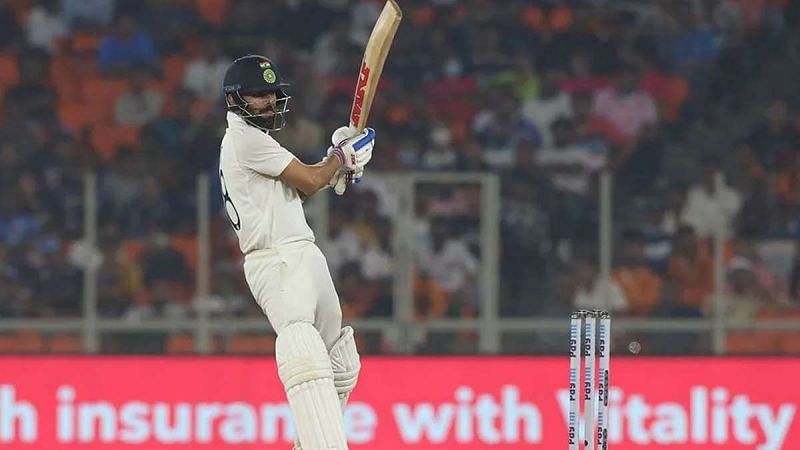 The highly anticipated day-night Test fizzled out in under two days, as India trounced England by ten wickets. The surface came under scrutiny once again, with neither of the teams going past 150 during the game.

Many slammed the pitch for being overtly friendly to the spinners, with only two half-centuries seen across the two days. Speaking during the post-match presentation, Virat Kohli put down the disappointing batting display to a lack of application from both sides.

“The result went our way, but the quality of batting was not up to the standards. They (England) got bundled out early, but even with our innings. We were 100/3 hoping to make many more than we ended up with. Just lack of application from both sides,” said Virat Kohli.

India take a 2-1 series lead after an eventful 48 hours in Ahmedabad. pic.twitter.com/J9P6wfyVZw

India take a 2-1 series lead after an eventful 48 hours in Ahmedabad. pic.twitter.com/J9P6wfyVZw

Both India and England found runs hard to come by at the revamped Motera stadium. The spinners ran the show, and batsmen struggled to cope with the turn and bounce on offer. On a day when former cricketers like Michael Vaughan slammed the pitch and even Joe Root was sceptical of the surface, Virat Kohli chose to go in a different direction.

“Literally a very good pitch to bat on, especially in the first innings. It felt like the ball was coming on nicely, with the odd ball turning. It was just below par batting from both teams. Our bowlers were much more effective and that’s why we got the result,” said the Team India skipper.

Virat Kohli was told after the game about how most of the batsmen succumbed to straight deliveries. Many batsmen from both teams were out playing for the turn that never came, and Virat Kohli admitted the prospect of a spinning ball played with their minds.

“It was bizarre that out of the 30 wickets, 21 were off straight balls. I feel that’s just lapse of concentration, indecision or too many things going on in your head as a batter where you’re playing for the turn but getting beaten on the inside,” he said.

With bowlers on top, the Day-Night Test was wrapped in under two days. The third Test was the shortest since 1935 as the batsmen were caught out by a mix of disciplined bowling and tricky conditions. A notable theme of the game was how just a handful of batsmen lasted more than 50 balls, and Virat Kohli advised batsmen to trust their defence more going into the future.

“I honestly feel like batsmen need to trust their defence much more than they are at the moment. Test cricket is all about that. You are not going to get results in two days all the time. This was a classic example of batsmen not applying themselves enough and that’s why such a quick game,” signed off Virat Kohli.

Inzamam-ul-Haq has become the latest cricketer to have a say on the Ahmedabad pitch. The former Pakistan skipper refused to credit India’s spinners for getting the better of the English batsmen, especially after Joe Root got a fifer.

Virat Kohli claimed that the pitch in Ahmedabad was “very good to bat on”, putting the poor batting display down to a lack of application from both teams. But former England skipper Alastair Cook thinks otherwise, disagreeing with the Indian captain’s assessment of the surface.

Rohit Sharma brought about the winning runs with a six as Team India won the pink-ball Test against England in Ahmedabad by ten wickets to wrap up an emphatic victory with a whopping three days to spare.