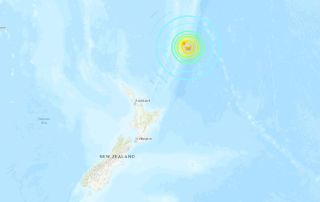 A tsunami warning has been issued for parts of New Zealand, with some residents being told to evacuate, after a strong earthquake struck off the country’s coast on Friday (March 5), according to news reports.

The powerful 8.1-magnitude earthquake occurred at 8:28 a.m. local time near New Zealand’s Kermadec Islands, which are part of New Zealand and lie about 500 miles (800 kilometers) northeast of the country’s main North Island, according to CNN. It was the third strong earthquake — higher than a magnitude 7.0 — to strike the region in a span of less than eight hours, according to The Washington Post.

Residents in New Zealand’s coastal areas were being urged to check for updates on the tsunami threat, and residents of some areas being told to evacuate due to a risk of flooding, according to the warning issued by the New Zealand National Emergency Management Agency.

“Evacuation advice overrides the current COVID-19 Alert Level requirements,” the agency wrote on Twitter. “Listen to local Civil Defence authorities and follow any instructions. If you are told to evacuate do not stay at home.”

“Tsunami activity will continue for several hours and the threat must be regarded as real until this warning is cancelled,” the agency said.

The quake also prompted a tsunami warning in American Samoa, due to a risk of sea-level fluctuations along beaches, according to The Weather Channel. A tsunami watch was also issued for Hawaii, but was later discontinued, according to the Post.

The earthquake was the strongest one to strike anywhere in the world since May 2019, when an 8.0-magntidue earthquake struck Peru, the Post reported.

New Zealand is situated on the edge of the boundary between the Pacific tectonic plate and the Australian tectonic plate. That 1,864-mile-long (3,000 kilometers) boundary extends from south of Macquarie Island to the southern Kermadec Island chain, the U.S. Geological Survey reported. Where this particular earthquake occurred, the Pacific plate is diving beneath or subducting the Australian plate, the Post reported. That movement releases energy in the form of seismic shaking, or an earthquake.

After a 900-year nap, a volcano in Iceland erupted Friday (March 19), spewing tendrils of molten lava down its flanks and bathing the cloudy night… 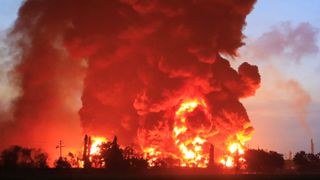 A massive fire has broken out at one of Indonesia’s largest oil refineries, creating a towing inferno and dark plumes of smoke and toxic fumes. Some experts say lightning could have sparked the fire and explosion.