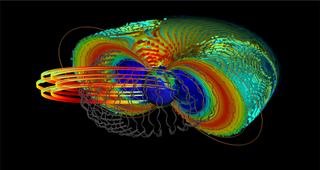 An illustration of Earth’s Van Allen belts, with the trajectories of ultra-relativistic electrons in gray. The colorful loops in the foreground are the orbits of satellites that must pass through this electromagnetically dangerous area of space.
(Image credit: Ingo Michaelis & Yuri Shprits, GFZ)

In the swirl of a perfect solar storm, electrons can get trapped near Earth, where they can accelerate to nearly the speed of light.

These electrons get their zip from surfing on waves of super-heated, charged gas called plasma that gets launched from the sun during solar storms. They accelerate to near-light speed, though, only when the plasma density is low, according to a new study led by researchers from the GFZ German Center for Geosciences in Potsdam.

The findings are important because electrons traveling so quickly are particularly dangerous to satellites and other electronic equipment. They can penetrate the shielding that protects satellites from other charged particles in solar storms, damaging sensitive components.

The phenomenon occurs in the two Van Allen radiation belts, which are loops of charged particles trapped in a kind of donut shape around Earth. The belts, which extend from about 400 miles to more than 36,000 miles (640 to 58,000 kilometers) above Earth’s surface, protect our planet from charged particles emanating from the sun. But they also react to solar storms in ways that aren’t fully understood. In 2012, NASA launched two Van Allen Probes to take measurements in this mysterious zone of near-space. The probes detected electrons at “ultra-relativistic energies” — in other words, traveling near the speed of light.

Researchers weren’t sure how the electrons were becoming so energetic; some thought that the electrons must be accelerating in two stages, first on a journey from outside the outer reaches of the belts and then again deep inside them. But new data from the Van Allen Probes found that two stages aren’t needed. Instead, the electrons’ speed has everything to do with the density of background levels of plasma during a solar storm.

“This study shows that electrons in the Earth’s radiation belt can be promptly accelerated locally to ultra-relativistic energies, if the conditions of the plasma environment — plasma waves and temporarily low plasma density — are right,” study co-author Yuri Shprits, a space physicist at GFZ Potsdam, said in a statement.

Typically, the density of plasma within the Van Allen belts might be between 50 and 100 particles per cubic centimeter. But when the density drops to less than 10 particles per cubic centimeter, electrons can draw energy from electromagnetic waves known as “chorus waves,” boosting their kinetic energy from a few hundred thousand electron volts to 7 million electron volts. (For comparison, the linear accelerator used up to 2020 at CERN accelerates protons up to 50 million electron volts.) Researchers already suspected the chorus waves might be the culprit for accelerating the electrons, but had not previously realized that this could only happen when plasma density was so low. The low density seems to allow more efficient transfer of energy from the waves to the electrons.

These density drops don’t happen very often, the researchers wrote in their paper, published Jan. 29 in the journal Science Advances. In 2015, when the observations were taken, the right conditions appeared only a “handful” of times, they added. These extreme conditions may have something to do with prolonged convection in the Van Allen belts, which is when when hotter, lighter material is rising and denser, cooler material is sinking, the researchers wrote, but more study is needed to find out why the plasma occasionally thins so much.

Categories: News
Tagged: chorus waves might be the culprit for accelerating the electrons, Earth, plasma, said in a statement, Science Advances, up to 50 million electron volts, Van Allen radiation belts

Scientists have measured the shortest unit of time ever: the time it takes a light particle to cross a hydrogen molecule.

Scientists should be able to create magnetic fields on Earth that rival the strength of those seen in black holes and neutron stars, a new study suggests.