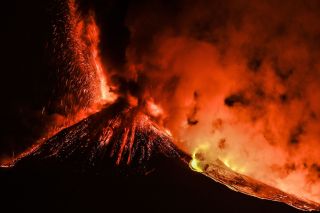 Fortunately, no injuries, evacuations or serious damage have resulted from the volcano’s latest spurt of activity. But the eruptions — many occurring at night — have drawn the world’s awe and attention with their eerie displays of light and lava. During a series of eruptions between Feb. 20 and 23, fountains of lava soared up to 0.9 miles (1.5 kilometers) over Etna’s summit — roughly three times the height of One World Trade Center in New York, according to NASA.

In one particularly striking photo, shown below, oozing tendrils of magma spread out of the darkness toward a church in Catania, Italy. It’s an impressive illusion; downtown Catania, more than 15 miles (25 km) from the volcano crater, is in no danger from the eruption, according to the Associated Press (AP).

During its long history (geologists believe Etna formed more than 350,000 years ago), the volcano has occasionally turned lethal. The deadliest historical eruption by far occurred in 1669, when the volcano spewed continuously from March to July. This became known as the Great Eruption.

Early in the Great Eruption, several fissures cracked open on the southeastern side of the volcano, according to Brittanica.com, unleashing a river of lava, ash and rock over the countryside. The flow destroyed a dozen towns and briefly overtook the city walls of Catania, submerging the town’s western quarter before oozing onward into the sea. No one knows exactly how many died in the Great Eruption, but later reports estimated thousands of deaths.

During the current, relatively mild eruption, ash has posed a bigger problem than lava. Sicily’s Catania Airport was temporarily closed due to the ash column, and residents of small towns closer to the volcano have had to deal with an occasional raining of ash and stones, the AP reported.

Mount Etna erupts, as seen from space on Feb. 18, 2021.  (Image credit: Landsat data from the U.S. Geological Survey) Mount Etna has been spewing…

After a 900-year nap, a volcano in Iceland erupted Friday (March 19), spewing tendrils of molten lava down its flanks and bathing the cloudy night…

A meteor streaked through the night sky over Vermont on Sunday (March 7), creating a spectacular light show and causing Earth-shaking booms as it burned through the atmosphere.

An ornate four-wheeled chariot of iron, bronze and wood that archaeologists think was drawn by a team of horses in processions through Pompeii almost 2,000 years ago has been unearthed during excavations of a wealthy Roman villa just north of the ancient city’s walls.