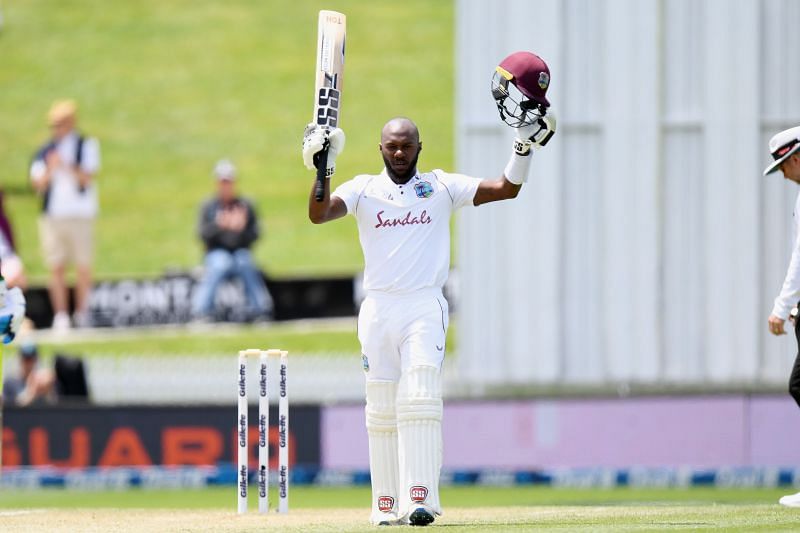 West Indies lost the first Test of the series against New Zealand at Hamilton by an embarrassing margin of an innings and 134 runs. West Indies batsman Jermaine Blackwood was one of the key positives for the visitors in the match.

After looking good during his 23 in the first innings, Jermaine Blackwood scored a brilliant century in the second essay to add some respectability to West Indies’ otherwise disastrous performance.

Jermaine Blackwood hit a brilliant 104 from 141 balls with the aid of 11 fours and two sixes. He occupied the crease for 239 minutes and featured in an unexpected eighth-wicket stand of 155 with Alzarri Joseph, who contributed an aggressive 86 from 125 balls.

Jermaine Blackwood’s impressive partnership with Joseph lifted West Indies from 89 for 6 to 247 in their second innings, though it could not stop New Zealand from clinching the game well inside four days.

One of the most talented batsmen in the current West Indian batting line-up, the 29-year-old Jamaican made his Test debut back in 2014. He got picked on the basis of being the leading run-scorer in the 2013-14 season of Regional Four-Day Competition with 611 runs.

Jermaine Blackwood displayed his talent in his very first innings, making a fluent 63 from 110 balls, coming into bat at number eight. West Indies won the Test by 10 wickets.

Disappointingly, he hasn’t live up to his early promise. After 32 Tests, Jermaine Blackwood has just 1700 runs to his name at a poor average of 32.07 with two hundreds and 12 fifties.

Alzarri Joseph rode his luck one too many times and is caught in the deep.

Alzarri Joseph rode his luck one too many times and is caught in the deep.

Jermaine Blackwood’s 104 at Hamilton was his first Test hundred since the unbeaten 112 he registered at North Sound against England back in April 2015. He has looked good many times out in the middle, but his tendency to lose concentration has often got the better of him.

The fluent right-handed batsman has only featured in two ODIs for West Indies and hasn’t played a single T20I so far.

Jermaine Blackwood is a veteran at the first-class level. In 106 matches, the Jamaican has 6260 runs to his name with six hundreds and 43 fifties. He represents Jamaica Tallawahs in the CPL, and has scored 357 runs from 27 matches in the T20 competition at a strike rate of 91.07.

West Indies batsman Jermaine Blackwood has revealed how a small conversation with Indian captain Virat Kohli helped him change his approach towards batting.