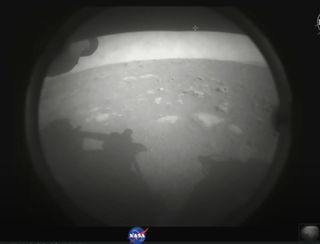 This is the first image Perseverance beamed home from its landing site immediately upon touching down.
(Image credit: NASA/JPL)

One of the most exciting aspects of successful landing of NASA’s Perseverance rover on Mars is the fact that the laboratory-on-wheels will start the first leg in a long-awaited sample-return mission.

Researchers have never gotten their hands on fresh pieces of the Red Planet, meaning that many key pieces of information — such as the age of features on the Martian surface — remain unknown. Perseverance aims to change that, with a plan to drill and capture up to 30 test-tube-size samples from the mudstone rocks in its landing site, known as Jezero crater.

A key challenge will be ensuring that these samples are the best ones possible, giving scientists the most informational bang for their buck. To find out more about how NASA’s engineers will do that, Live Science reached out to geochemist and Perseverance project scientist Ken Farley of the California Institute of Technology in Pasadena, California.

Images from orbiting spacecraft have already identified the 28-mile-wide (45 kilometers) Jezero crater as an ancient water-carved delta, where a river flowed into an ancient lake. Perseverance is scheduled to land in the delta’s basin, most likely near the base of some cliffs full of fine-grained sedimentary rocks, Farley said.

After touchdown, mission controllers will probably tell the rover to drive to the cliff base, he added, since such sediments were liable to have been laid down by mud collected by the river water that flowed out into the ancient floodplains of the delta. That’s where Perseverance will hunt for indicators of past life.

“If you want to find some structure made by a living organism, you don’t want to do it in a raging river,” Farley said. “It gets destroyed.”

Mud is an excellent preserver of biosignatures, or chemical clues left behind by living creatures, because it can trap and hold onto materials as it gets laid down. Orbital images have also indicated volcanic rocks lurking in the same area, so it’s possible the rover will try to collect at least a couple samples at the cliff base, Farley said.

From orbit, researchers can’t tell if the volcanic rock is above or below the mudstones, meaning they don’t know which one is older, and was therefore laid down first. Perseverance will be able to visually identify this key fact using its cameras and then, once the samples have returned to Earth, chemists will be able to use the decay rates of radioactive elements to figure out the rocks’ exact ages, said Farley.

In some sense, Perseverance has a leg up on its nearly identical cousin, Curiosity, a rover that landed on Mars in 2012 and has been exploring a region called Gale crater ever since, he added. Curiosity has spent years determining whether or not Gale was an ancient lake, meaning it could have been a good abode for life. The evidence that Jezero had a watery past is much clearer.

“Our mudstone is in a delta,” said Farley.

Mission controllers will also look for samples with carbonate minerals — rocks that contain carbon compounds such as limestone. Carbonates on Earth preserve a great deal of information about past climatic conditions, Farley said, and the same is hoped for such rocks on Mars.

With these samples in hand, terrestrial researchers could determine the pH, or level of acidity, of the ancient lake water, as well as its salinity. The most important question that could be answered in Farley’s mind is how long the lake lasted at Jezero.

“Was that lake there for 100 years? 1,000 years? A million? 10 million?” he said, adding that each of these different time frames would have different implications for how long organisms could have lived in the area.

Experiments to glean such data can’t really be done on Mars because they require large instruments or a great deal of manual processing that requires human technicians. But some analyses will be easier to do on the Red Planet with Perseverance and its suite of state-of-the-art instruments, said Farley.

As an example, he mentioned the rover’s Scanning Habitable Environments with Raman & Luminescence for Organics & Chemicals (SHERLOC) and Planetary Instrument for X-ray Lithochemistry (PIXL) instruments. These should be able to detect and map organic material in rocks on the ground, meaning that scientists will already be making key breakthroughs long before samples come back to Earth.

That’s good because Perseverance will have to wait years before a second mission can bring its rock collection home. During that time, Perseverance will need to gather what researchers believe to be the most important samples. NASA has appointed a special group of Return Sample Scientists who will help determine exactly which rocks the rover will take samples from.

Perseverance will store its treasures in a small canister and either drive them over to this future, as-yet-unbuilt robot or set them down somewhere to be picked up, allowing them to be placed in a small rocket and brought to Martian orbit. The current plan is for such a mission to be built by and launched in 2026, and so Farley’s team is expecting to have all their samples stored by 2028, when that spacecraft would land on Mars.

“After that, it’s pencils down,” he said.

It’s possible that, due to budget and time constraints, the sample collection mission will be delayed by around two years. But in either case, “there’s a fascinating tension between wanting to get the best stuff, needing to get everything and getting to the party on time,” said Farley.

For that reason, the team is hoping to be “disciplined and flexible,” he added, since they don’t yet know exactly how much room there will be on the return rocket. It’s possible that, in the end, engineers will be able to build a rocket that can only carry enough fuel to bring 20 samples, Farley said. But either way, that will still represent an excellent bounty to scientists here on Earth.

NASA is scheduled to land its Perseverance rover and Ingenuity helicopter on Mars on Feb. 18, 2021. And the agency chose the perfect spot for a touchdown: Jezero Crater. The crater is located in the so-called Isidis Planitia region, just north of the equator in the eastern hemisphere of Mars. This flat plain is located inside a giant 750-mile-wide (1,200 kilometers) basin that was carved out 3 billion to 4 billion years ago when a comet or big asteroid slammed into the Red Planet. A smaller meteorite, some time later, created Jezero within this larger impact basin. Evidence suggests a river once flowed into Jezero, where it formed a delta that has long since dried up, according to NASA. Here’s a look at Perseverance’s landing spot.

The long deep-space journey of NASA’s next Mars rover is nearly over.

NASA’s Perseverance rover is only a few days away from its daring seven-minute landing on Mars, where it will touch down on the most challenging…

NASA’s rhinoceros-size Perseverance rover pulled off the most precise landing in Martian history Thursday (Feb. 18), touching down successfully in Jezero crater. The landing put the mobile robot laboratory in position to begin the hunt for signs of long-lost life in the ancient remnants of a river delta that once flowed through the region.