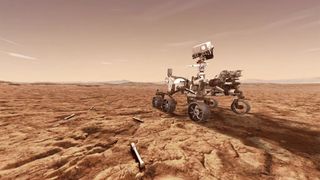 NASA’s rhinoceros-size Perseverance rover pulled off the most precise landing in Martian history Thursday (Feb. 18), touching down successfully in Jezero crater. The landing put the mobile robot laboratory in position to begin the hunt for signs of long-lost life in the ancient remnants of a river delta that once flowed through the region.

The 2,260-pound (1,025 kilograms) machine radioed home a series of short chirps during its meteoric plunge into the Martian atmosphere, indicating success during each of the complex maneuvers that were required to safely deposit its bulk on the surface. (Live Science detailed these maneuvers here.) The final stage of the landing involved a never-before-used robotic skycrane that guided the rover to a safe landing location and brought its plunge to a complete halt before lowering it 65 feet (20 meters) to the surface using cables. Relaying its signal through the Mars Reconnaissance Orbiter (MRO) satellite, the rover reported that it was on the surface and safe at 3:56 p.m. ET.

“Touchdown success! Perseverance has landed on Mars,” said Swati Mohan, guidance and control operations lead for the mission and NASA’s mission commentator on NASA TV’s live stream during the event.

A video feed showed the Jet Propulsion Laboratory’s entry, descent and landing team erupting with cheers when Perseverance sent its chirp of success, which arrived after a 15-minute delay due to the distance between Mars and Earth and a certain amount of lag from the MRO.

Perseverance hasn’t yet sent any images home, though they should be coming in the following hours and days. NASA mounted cameras and a microphone on the descent vehicle and rover to record the landing. The large video files may take up to a week to fully upload across interplanetary space, NASA said.

Perseverance’s life-hunting mission means that the rover is more or less a $2.7 billion nuclear-powered geologist, carrying a big toolbelt of instruments to precisely observe the compounds present in the crater’s minerals, looking for signs of ancient life. It also carries a ground-penetrating radar to study the subsurface geology of the region and an experiment designed to produce oxygen from Martian carbon dioxide — a proof of concept of a technology that would likely be a key component of any future crewed Mars missions. The rover will also collect samples that NASA hopes to return to Earth using a future joint mission with the European Space Agency.

A pigeon-sized helicopter named Ingenuity rode to the surface attached to Perseverance’s belly. It’s also a proof-of-concept experiment, the goal being to achieve the first powered flight on Mars.

All of that will take time to get up and running, however. For now, NASA can breathe a sigh of relief that its big project wasn’t destroyed on impact.

NASA’s Perseverance rover is only a few days away from its daring seven-minute landing on Mars, where it will touch down on the most challenging…

NASA’s Perseverance rover just landed on the Martian surface, and it has already sent home its first two images.