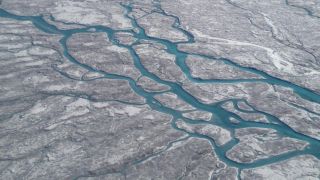 The mystery of a growing “dark zone” on Greenland‘s melting ice sheet has been solved.

Researchers have found that phosphorus-rich dust blown across the ice may be the key to the phenomenon.

Greenland’s ice sheet is the second largest in the world. It covers around 656,000 square miles (1.71 million square kilometers), an area three times the size of Texas, according to the National Snow and Ice Data Center (NSIDC). However, the ice sheet is now in a state of permanent retreat and is losing 500 gigatons (500 billion tons) of ice every year, Live Science previously reported.

That’s why the dark zone is so worrisome. During the summer months, part of the western section of the ice sheet turns from brilliant white to inky gray as algae bloom across the surface. Since 2000, these blooms have gotten bigger, causing the dark zone to expand, according to a statement by the researchers.

The darker color of the ice reduces its albedo — the amount of sunlight it reflects back to space — and causes the ice sheet to absorb more heat. However, until now, what triggers these algal blooms has remained a mystery.

“We see a lot of variability in the blooms that form on the ice-sheet surface,” said Jenine McCutcheon, a microbiologist at the University of Waterloo in Ontario and lead author of the new study describing the findings. “We wanted to better understand what causes their growth,” she told Live Science.

During the Arctic’s sunless winter months, the ice algae — primarily made up of Ancylonema nordenskioeldii and species in the Mesotaenium genus — remain in a dormant state deep within the ice. During spring, as the ice melts, these algae slowly migrate to the surface. When they reach the surface, the Arctic summer provides 24-hour sunlight for photosynthesis and growth. The algae are normally green, but when exposed to constant sunlight, they create dark-colored sunscreens to protect themselves from damaging ultraviolet rays. This is what darkens the ice and, ironically, causes it to absorb more sunlight.

But sunlight alone didn’t seem enough to cause the expansive blooms the researchers were seeing.

After the researchers analyzed samples they collected from the surface, “it became clear phosphorus was the most important nutrient to the algae,” study co-author Jim McQuaid, a climate scientist at the University of Leeds in England, told Live Science. “We then found that it was originating locally.”

In Greenland, the phosphorus comes from hydroxylapatite — a phosphate mineral that also contains calcium, oxygen and hydrogen — that gets blown across the ice as dust from exposed rocky outcrops.

“As the atmosphere gets warmer due to climate change, the exposed rock becomes drier and winds get stronger,” McQuaid said. “This means more dust is transported across the ice.”

Melting ice in the area also uncovers more hydroxylapatite-rich rocks, thus increasing the available phosphorus. So the algal blooms are part of a positive feedback loop: The increased ice melting leads to a higher phosphorus input, which spurs the algal growth that, in turn, further increases the ice melting.

“This type of thing will continue to happen in the future; there’s no doubt in my mind,” McQuaid said, referring to the accelerated melting.

However, now that scientists fully understand the dark zone phenomenon, they can more accurately predict how fast the Greenland ice sheet will melt.

“If we can measure the amount of phosphorus that’s in the environment, it may be possible to translate that to an estimate of algal growth and allow us to better monitor the rate of ice melting,” McCutcheon said.

The study was published online Jan. 25 in the journal Nature Communications.

The Arctic Ocean was once a pool of fresh water capped with an ice shelf half as thick as the Grand Canyon is deep.

Frigid lakes locked beneath the Antarctic ice sheet may be home to more microbial life than scientists ever imagined.

Scientists boring more than a mile deep into Antarctic ice have unearthed a mineral that’s rarely seen on Earth but found in abundance on Mars,…