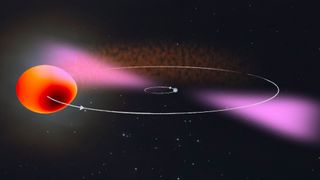 “Black widows” and “redbacks” in astronomy, as Live Science previously reported, are species of neutron stars — the ultradense remnant cores of giant stars that exploded. Some neutron stars, called pulsars, rotate at regular intervals, flashing like lighthouses. The fastest-spinning among them are millisecond pulsars. When a millisecond pulsar is locked in a rare, tight orbit with a lightweight star, it slowly shreds its partner to bits with each rotation. These binary cannibals are known as black widow or redback stars. Now, with the help of citizen scientists, a team of researchers has revealed a new redback at the heart of a bright system known as PSR J2039–5617.

Since its discovery in 2014, researchers have suspected that PSR J2039–5617 contained a millisecond pulsar and a second star. The bright source of X-rays, gamma rays and visible light closely matched the expected traits of such a system. But proving it required scads of telescope data and more number-crunching than a typical desktop computer could do in a century.

To prove that the star system was indeed a redback, the researchers leaned on the computing power of [email protected] — a project of the LIGO Scientific Collaboration and Germany’s Max Planck Institute where more than 500,000 volunteers let their idle computers work together on complex astronomy problems.

In two months, the researchers revealed that PSR J2039–5617 houses a deadly redback, heating up one side of its companion star so that side appears brighter and bluer. The redback’s massive gravity also warps its companion’s shape, causing “the apparent size of the star to vary over the orbit,” lead author Colin Clark, a University of Manchester astronomer, said in a statement,

The redback’s radio emissions also sometimes get eclipsed by material blown off the surface of the companion star. All those features of the complex system produce strange, varying light patterns, described in a paper set to be published in March (and available online now) in the journal Monthly Notices of the Royal Astronomical Society.

The universe may be filled with “mirror” particles — and these otherwise-undetectable particles could be shrinking the densest stars in the universe, turning them into black holes, a new study suggests.