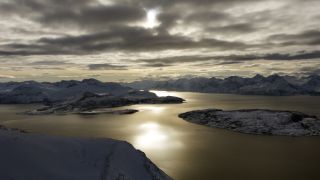 Radioactivity levels have spiked in the atmosphere over northern Europe, and that could indicate damage at a nuclear power plant in western Russia, according to a Dutch health agency that has analyzed the data. The radioactive spike suggests damage to a nuclear fuel element, the Associated Press reported.

However, the Russian nuclear power operator Rosenergoatom has denied problems related to facilities in Kola and Leningrad, the two nuclear plants operating in the region, according to TASS, a Russian news agency, as reported by the AP.

Several Scandinavian watchdog agencies detected the elevated levels of the radionuclides (or radioactive isotopes). Radionuclides are atoms whose nuclei are unstable; the excess energy inside the nucleus gets released through radioactive decay. In particular, concentrations of the radionuclides cesium-134, cesium-137 and ruthenium-103 rose in parts of Finland, southern Scandinavia and the Arctic, Lassina Zerbo, the Executive Secretary of the Comprehensive Nuclear-Test-Ban Treaty Organization, wrote on Twitter. Though these pose no harm to humans, they are byproducts of nuclear fission, Zerbo wrote.

“The radionuclides are artificial, that is to say they are man-made. The composition of the nuclides may indicate damage to a fuel element in a nuclear power plant,” an official with the National Institute for Public Health and the Environment in the Netherlands, which analyzed the isotope data, said on Friday (June 26).

Because so few measurements have been taken, monitoring agencies weren’t able to identify a specific source, NIPHE officials said.

The sudden radioactivity spike echoes the events following the Chernobyl nuclear meltdown, the biggest nuclear disaster in history. Within a few days of the 1986 disaster, a Swedish nuclear power plant detected elevated radioactivity levels, according to an account from the European parliament.

In recent years, another radioactive mystery cloud wafting over Europe was tied to Russia. In 2017, a plume holding 1,000 times the normal levels of ruthenium-106 was detected over Europe, The Washington Post reported. Russia denied any involvement, though a nuclear reprocessing plant in Russia was a strong suspect, according to a 2019 study in the journal Proceedings of the National Academy of Sciences.

For a limited time, you can take out a digital subscription to any of our best-selling science magazines for just $2.38 per month, or 45% off the standard price for the first three months.View Deal

Categories: News
Tagged: 5 everyday things that are radioactive, according to an account from the European parliament, cesium-137, Chernobyl, frozen in time, Images: Chernobyl, Live Science, Stunning images of Russia from above, The Associated Press reported, wrote on Twitter

Russian authorities have reported the first known cases of an avian influenza virus called H5N8 passing from poultry to humans, according to news reports.

Nuclear weapons, global pandemics, accelerating climate change: Is humanity running out of time? Despite 2020’s general awfulness, humanity paused on the path forward to armageddon — at least, according to the Doomsday Clock, a hypothetical timepiece that annually assesses our nearness to utter annihilation.

On Aug. 4, a series of massive explosions rocked the port of Beirut in Lebanon, and the biggest was one of the most powerful blasts in history that was not produced by a nuclear bomb, according to a new analysis.

Scientists have successfully studied einsteinium — one of the most elusive and heaviest elements on the periodic table — for the first time in decades. The achievement brings chemists closer to discovering the so-called “island of stability,” where some of the heftiest and shortest-lived elements are thought to reside.