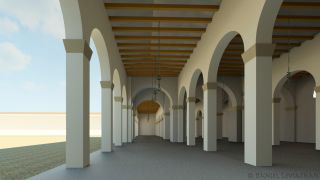 A reconstruction of the latest phase of the mosque, which collapsed during a 1068 earthquake.
(Image credit: Reconstruction by D. Leviathan)

Archaeologists found the foundational remnants of the roughly 1,350-year-old mosque beneath another mosque that had been built on top of it in Tiberias, a city in northern Israel.

“We know about many early mosques that were founded right in the beginning of the Islamic period,” excavation leader Katia Cytryn-Silverman, a specialist in Islamic archaeology at Hebrew University in Israel, told the Associated Press (AP). Other early mosques, including the The Prophet’s Mosque in Medina, Saudi Arabia, built in A.D. 622, and the Great Mosque of Damascus in Syria, completed in A.D. 715, which were expanded and rebuilt over the years, are still used as places of worship, meaning archaeologists can’t do thorough excavations there.

“It is not possible to excavate those sites, because they are generally located under mosques that are still being used,” Cytryn-Silverman said in a statement from Hebrew University. “Here in Tiberias, we had this remarkable opportunity to excavate the site and research what lay beneath.”

The newly discovered mosque dates to the second half of the seventh century, making it the “oldest ever-discovered Friday mosque [a mosque that holds Friday, or Jumu’ah noon prayers], apparently even predating the previously oldest mosque found in Wāsit, Iraq (dated 703), by several decades,” she said in the statement.

All that’s left of this centuries-old mosque are its foundations and artifacts found in the fill under those structures, such as coins and pottery fragments dating to the seventh century, which helped date the building.

Archaeologists have known about this site since the 1950s. However, at the time, the mosque’s remains were misinterpreted as a covered Byzantine-period market, Cytryn-Silverman told Live Science. This mistake stuck, even when the late archaeologist Yizhar Hirschfeld found, in the late 2000s, “small round foundations, very rough and asymmetric, which he believed belonged to a building later than the ‘market,'” she said.

But during recent excavations by Cytryn-Silverman and her team, “I realized the ground plan of that ‘covered market’ was very similar to that of the early-eighth century Great Mosque of Damascus, which still stands,” Cytryn-Silverman told Live Science in an email. The team determined that the so-called Byzantine-period wall “was actually the foundation for the first row of columns of the early stage of the mosque,” which formed a quasi-rectangular building about 72 feet (22 meters) long by 160 feet (49 m) wide, she said.

The various excavations there over the years unearthed broken roof tiles from when the mosque, which was expanded over the years after its initial construction, collapsed during the earthquake of 1068. Archaeologists also discovered long bronze chains that once held glass mosque lamps. “The lamps, of course, shattered from the collapse, but the many remains of their handles allow us to understand their type,” Cytryn-Silverman told Live Science.

The Muslims who worshipped at this early mosque were neighbors with Jews and Christians, who also had religious buildings in the neighborhood, including a monumental church nearby that was “apparently the biggest church in the Galilee,” and the great Synagogue of Hammat Tiberias to the south, she said.

“So our finds, which teach that in its first stage the mosque was a more simple and humble structure compared to the houses of prayer nearby, show that the Islamization of the city was gradual, that the new rulers were tolerant, and that the new religion adapted to the dynamics of the others,” she said. In 635, Muslims conquered Tiberias and its surrounding areas, but the region was still a relatively tolerant place, Cytryn-Silverman said.

During the 720s and 730s, the mosque transformed into a larger building with a courtyard and at least one underground cistern (a tank for storing water). In the 800s, a minaret for calling Muslims to prayer was likely erected, Cytryn-Silverman noted. The mosque remained in use until the late 900s, according to a tombstone  found near the apse. Then, the earthquake destroyed it in 1068, and the Crusaders arrived in about 1100.

Editor’s Note: This story was updated at 1:49 p.m. EST on Feb. 3 to clarify that the 635 conquest was of Tiberias and its surrounding areas, not of the entire Levant.

Archaeologists have unearthed the identity tags of four children murdered by the Nazis at Sobibor death camp in eastern Poland.