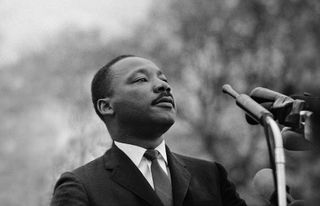 Martin Luther King Jr. was a pastor, humanitarian and leader in the American civil rights movement of the 1960s. In numerous speeches, marches and letters, he fought for racial and economic justice and was lauded for his nonviolent approach to civil disobedience. Assassinated in 1968 at the age of 39, King made an incredible impact on the country’s racial, cultural and intellectual landscape.

King was born on Jan. 15, 1929, to the Rev. Michael King and Alberta Williams King in Atlanta, Georgia. His birth name was Michael King Jr. The King family had deep roots in the Atlanta Black community and the African-American Baptist Church. Both his grandfather and father served in succession at Ebenezer Baptist Church (down the street from King’s childhood home), and established it as a major congregation in Baptist circles. They were also both leaders in the Atlanta branch of the National Association for the Advancement of Colored People (NAACP). Michael King Sr. changed his name and his son’s name to Martin Luther in 1934 to honor the 16th-century German religious reformer.

King attended segregated schools and graduated from high school at age 15, and in 1948 he received his Bachelor of Arts degree in sociology from Morehouse College in Atlanta in 1948. He then went on to earn a Bachelor of Divinity degree from Crozer Theological Seminary in Pennsylvania and a doctorate in Philosophy of Systematic Theology from Boston University. While in Boston, King met music student Coretta Scott. The two eventually married and had two daughters and two sons.

King contemplated an academic career but ultimately followed his father and grandfather to the pulpit. In 1954, he accepted the position of pastor at Dexter Avenue Baptist Church in Montgomery, Alabama.

In Montgomery, King stepped up as a prominent leader in the civil rights movement.

In 1955, when Rosa Parks refused to give up her seat on the bus to a white man and was arrested, local leaders formed an organization to protest Parks’ arrest and chose King to head the group. In this role, he became the primary spokesperson for what would become the 382-day Montgomery Bus Boycott. During the boycott, King was abused and arrested, and his house was bombed, but he remained a stalwart and committed leader.

King’s activism, leadership and ministry drew heavily on his Christian principles as well as the nonviolent teachings of Mahatma Gandhi. King skillfully drew upon a wide range of theological and philosophical influences to mobilize Black churches and communities and to appeal for white support. He turned from an untouchable view of God to a more supportive, reassuring concept, describing God as “a living reality that has been validated in the experiences of everyday life.”

After the Supreme Court outlawed bus segregation, King helped expand the civil rights movement throughout the South. He was elected president of the Southern Christian Leadership Conference and moved back to Atlanta to be closer to the organization’s headquarters and to become co-pastor with his father at Ebenezer Baptist Church. He also traveled and spoke widely, spreading the message of nonviolent protest; wrote five books; organized voting drives; led peaceful protests and marches; and was arrested more than 20 times.

In 1963, King led a nonviolent protest in highly segregated Birmingham, Alabama. The campaign was met with brutality from the police, who attacked demonstrators with dogs and hoses. King was arrested and, in a cell, drafted his famous “Letter from Birmingham City Jail,” which became a manifesto for civil rights and civil disobedience. The letter combined ideas from the Bible, the Constitution and other respected texts.

March on Washington and ‘I Have a Dream’ speech

On Aug. 28, 1963, about 250,000 people marched in Washington, D.C., in the largest demonstration of its kind in the city. At the Lincoln Memorial, King delivered the inspirational and oft-quoted “I Have a Dream” speech. The speech’s most famous phrases include:

“I have a dream that one day this nation will rise up, live out the true meaning of its creed: ‘We hold these truths to be self-evident, that all men are created equal …

“I have a dream that my four little children will one day live in a nation where they will not be judged by the color of their skin but by the content of their character.”

The speech inspired the nation and solidified King’s status as a national civil rights leader. After the march, King and other leaders met with President John F. Kennedy to discuss equal rights and an end to segregation.

Following the March on Washington, Time magazine named King its “Man of the Year.” The next year, in 1964 at the age of 35, King became the youngest person ever to win the Nobel Peace Prize. He donated the winnings to the civil rights movement. King received hundreds of other awards and several honorary degrees.

In addition to his work on racial issues, King became an activist for economic justice and a critic of the Vietnam War. He formed an organization called the Poor People’s Campaign, which was unpopular among some Black activists who wanted to take more radical approaches to social change, such as those advocated by the Black Power campaigns.

On April 3, 1968, in Memphis, Tenn., King delivered a poignant speech, intoning, “I’ve been to the mountaintop [and] I’ve seen the promised land. I may not get there with you. But I want you to know tonight, that we, as a people, will get to the promised land.”

The next day, while standing on the balcony of the Lorraine Motel, King was assassinated. White supremacist James Earl Ray was convicted of the crime, though the identity of King’s murderer was the subject of some controversy.

King had a profound impact on the United States. The March on Washington was influential in the passing of the landmark Civil Rights Act, which essentially made segregation illegal. The Voting Rights Act was passed as the result of the 1965 Selma to Montgomery March.

On Aug. 28, 2011 — the 48th anniversary of the March on Washington — a memorial to King was dedicated on the National Mall in Washington, D.C. The memorial consists of a 30-foot statue of King carved into the “Stone of Hope” breaking through two boulders representing the “Mountain of Despair.”

A political activist and minister of the Nation of Islam (NOI), Malcolm X was a major figure in the American civil rights movement during the 1960s. Advocating for Black rights and against racist institutions in the U.S., he gained notoriety for his impassioned speeches, in particular inciting active resistance against police violence. Estranged from the Nation of Islam by 1964, Malcolm X was assassinated in New York City on Feb. 21, 1965. His speeches and writings remain widely studied and celebrated by supporters of the civil rights movement.

Followers of Jesus span the globe. But the global body of more than 2 billion Christians is separated into thousands of denominations. Pentecostal, Presbyterian, Lutheran, Baptist, Apostolic, Methodist — the list goes on. Estimations show there are more than 200 Christian denominations in the U.S. and a staggering 45,000 globally, according to the Center for the Study of Global Christianity. So why does Christianity have so many branches?