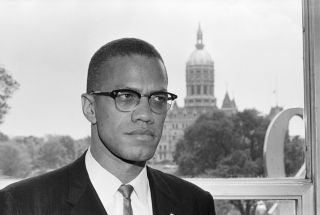 A political activist and minister of the Nation of Islam (NOI), Malcolm X was a major figure in the American civil rights movement during the 1960s. Advocating for Black rights and against racist institutions in the U.S., he gained notoriety for his impassioned speeches, in particular inciting active resistance against police violence. Estranged from the Nation of Islam by 1964, Malcolm X was assassinated in New York City on Feb. 21, 1965. His speeches and writings remain widely studied and celebrated by supporters of the civil rights movement.

Born in Omaha, Nebraska, on May 19 1925, Malcolm X was the fourth child of Earl and Louise Little. Earl Little was a preacher and local leader of the Universal Negro Improvement Association (UNIA), while his wife Louise was from the Caribbean island of Granada and a passionate Black rights activist. The city of Omaha had a history of violence between Black and white citizens. In 1919, a white mob stormed the Douglas County Courthouse and hanged a Black detainee named Will Brown, according to History Nebraska. At the time, Omaha had its own chapter of the National Association for the Advancement of Colored People (NAACP), but also strong ties to the Ku Klux Klan. By the end of 1921, Nebraska had some 1,100 members of the Klan across 24 chapters, according to NebraskaStudies.org.

As a prominent figure in the Black community, Malcolm X’s father regularly clashed with members of the Klan, who according to Les and Tamara Payne’s book “The Dead Are Arising: The Life of Malcolm X” (Penguin, 2020) threatened and intimidated the Little family, driving them out of town. In 1926 the family moved to Lansing, Michigan, but found their new life far from peaceful. Earl Little clashed with the Black Legion, a KKK splinter group known for violence towards the Black community. In 1929 the Little family home was burned to the ground, reportedly by members of the Black Legion.

According to Peniel E. Joseph’s book “The Sword and the Shield” (Basic Books, 2020), Little favoured Malcolm X for his lighter complexion, and Malcolm X later recalled attending UNIA meetings and listening to his father’s political speeches. On Sep. 8, 1931, Earl was run over and killed by a streetcar in the city.

The official police report stated it was an accident, but as Joseph explains: “The family immediately suspected racist violence by the Black Legion… Malcolm believed so too.” Traumatized by her husband’s death, and left to raise eight children alone, Louise Little’s mental health deteriorated and she was committed to Kalamazoo State Hospital in 1938.

Afterwards, Malcolm X was “shuttled between foster care and juvenile facilities”, according to Joseph. Despite excellent grades, he dropped out of high school at 15 and drifted into a life of petty crime, becoming involved in drug dealing, racketeering, theft and more. Eventually the thefts caught up to him and in 1944 Malcolm X was arrested for larceny.

Imprisonment and the Nation Of Islam

While serving time in prison, Malcolm X discovered the teachings of Elijah Muhammad. Muhammad was the leader of a new religious movement, the Nation Of Islam (NOI). The central tenets of the NOI was to pay homage to their African roots and build a community tempered by Black self-reliance. In 1950, the same year the FBI opened a file on Malcolm, he dropped his surname and adopted the letter ‘X.’

Upon his release from prison in 1952, Malcolm X travelled to Chicago to meet with Muhammad. Impressed with his intelligence and tenacity, Muhammad swiftly promoted him to assistant minister. By 1957 he had risen to become the organization’s national representative and the following year he married Betty X (also known as Betty Shabazz). The couple would have six children together.

According to Russell John Rickford’s book “Betty Shabazz: A Remarkable Story of Survival and Faith Before and After Malcolm” (Ebsco Publishing, 2003), the FBI had been surveilling Malcolm as a possible communist since 1953, but shifted their focus after his rapid ascent within the NOI. The NOI had become known for its radical ideology, its ministers preaching that Black people were the first people of the world and superior in every way to white people. While civil rights organizations fought to destroy segregation, the NOI actively sought it.

The NOI and Malcolm X also gained public attention following the Johnson X Hinton incident in Harlem, April 1957. According to Rickford, when police officers violently assaulted Hinton, a Black Muslim, Malcolm X led a huge crowd to the police station, demanding Hinton receive medical attention. When the demands were met, upon a word from Malcolm X the crowd peacefully left.

“The Ballot or the Bullet” speech

That control over an angry crowd was a sign of Malcolm X’s growing power and increased media profile, which he used to openly denounce other civil rights movements for their message of protest through nonviolence. In his autobiography, he stated: “I am for violence if nonviolence means we continue postponing a solution to the American black man’s problem just to avoid violence.” Malcolm X’s ethos, “by any means necessary”, made him an imposing and inflammatory figure to some in white society and those in the Black community who disagreed with him.

In December 1963, he described the assassination of President John F. Kennedy as a sign of white America’s “chickens coming home to roost”, prompting a public outcry and leading the NOI to suspend him. In March 1964, Malcolm X announced he was leaving the movement.

A month later he gave his infamous “The Ballot or the Bullet” speech at a baptist church in Detroit, Michigan, stressing the need for African-Americans to pursue Black Nationalism and arguing against non-violent protest. “Any time you’re living in the 20th century, 1964, and you walking around here singing “We Shall Overcome,” the government has failed you,” he said. “Today it’s time to stop singing and start swinging… Cassius Clay can sing. But singing didn’t help him to become the heavyweight champion of the world. Swinging helped him.”

In April 1964, Malcolm X left the U.S. for a tour of Africa and a pilgrimage to Mecca, giving speeches decrying America’s treatment of Black citizens. According to Rickman, while on this trip Malcolm X embraced the peaceful doctrines of Sunni Islam and preached the importance of all Americans, regardless of race, religion or background, working together to achieve equality. He also adopted a new name, El-Hajj Malik El-Shabazz, reflecting his changed approach to his religion, and his distance from Elijah Muhammed.

Upon returning to the U.S. he had become a sworn enemy of the NOI and his family lived a life under constant threat from the NOI, as well as surveillance by the F.B.I and C.I.A.   According to Rickford, Malcolm X’s wife Betty was convinced he would be killed and even received an anonymous phone call claiming her husband was “as good as dead.”

On the night of Feb. 14, 1965, Malcolm X’s home was fire-bombed. He and his family barely escaped the flames. Just under a week later on Feb. 21 1965, he addressed the Organization of Afro-American Unity at the Audubon Ballroom in New York. According to the book “Malcolm X The FBI File” (Skyhorse Publishing, 2012) someone in the 400-strong crowd shouted, “Get your hands out of my pocket!” Malcolm X’s bodyguards waded into the crowd to quell the disturbance, but three men opened fire on him with a sawed-off shotgun and automatic pistols. Malcolm X was struck 21 times. Soon after, he was pronounced dead at Columbia Presbyterian Hospital.

Despite his premature death, Malcolm X’s speeches and writings remain widely read. While some of his polarizing views remain debated, his contribution to the civil rights movement is broadly acknowledged and in many states May 21, his birthday, is observed as Malcolm X Day.

Martin Luther King Jr. was a pastor, humanitarian and leader in the American civil rights movement of the 1960s. In numerous speeches, marches and letters, he fought for racial and economic justice and was lauded for his nonviolent approach to civil disobedience. Assassinated in 1968 at the age of 39, King made an incredible impact on the country’s racial, cultural and intellectual landscape.