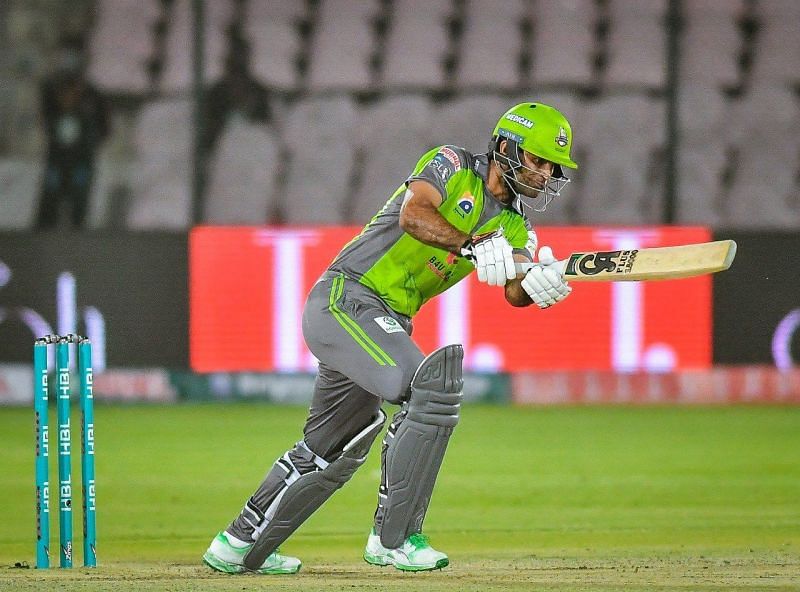 Sparkling, unbeaten knocks by Mohammad Hafeez and Fakhar Zaman propelled Lahore Qalandars to a dominating 9-wicket victory over Quetta Gladiators in the 4th match of the PSL 2021.

Having won their opening match against Peshawar Zalmi, the Qalandars easily chased down the imposing 179-run target to make it two wins out of two, and go top of the table.

On the other hand, the Gladiators have now lost both their opening matches and sit at the bottom of the PSL points table with the worst NRR of the lot.

After winning the toss for a second consecutive game, it was no surprise when Lahore captain Sohail Akhtar stuck with the winning formula and opted to field.

He was rewarded yet again as Haris Rauf (3/38) and Shaheen Afridi (1/43) sent both the Quetta openers packing. While Tom Banton top-edged one to third man off Rauf, Saim Ayub’s attempted loft off Shaheen only went as far as mid-on.

With Gladiators reeling at 12/2, skipper Sarfaraz Ahmed joined Chris Gayle in the middle and the duo put up a terrific rescue act, stitching together a 101-run partnership off just 68 balls.

While Sarfaraz was his usual busy self at one end and accumulated 40 runs off 33 balls, the Universe Boss went about his job in the same casual manner we’ve come to associate with him.

Dropped twice by Agha Salman, the 41-year-old made the most of his luck by hitting five boundaries and five sixes in his knock of 68 runs (40 balls).

Haris Rauf came back to break the partnership. Sarfaraz top-edged a pull shot and was caught by wicketkeeper Ben Dunk, who did well to run back and hold on to the skier.

Gayle was also sent packing in the next over after his attempted sweep off Afghan superstar Rashid Khan (1/30) only resulted in his stumps getting disturbed.

Thereafter, Mohammad Nawaz’s unbeaten cameo off 34 from just 20 balls took the Gladiators to what seemed like an above par 178/6.

Bowlers do love having the luxury of runs on the board while defending but it seems like Sarfaraz’s troops got a little too carried away.

Wayward and guilty of bowling a little too short, they were deservedly punished by the stylish Fakhar Zaman, who added 64 runs with skipper Sohail Akhtar for the first wicket.

Even though the latter fell to leg-spinner Zahid Mahmood’s googly when on 21, it turned out to be the only positive of the day for Quetta’s bowlers.

Nicknamed ‘The Professor’ for his calculated approach, the evergreen Hafeez went on a rampage and carted the bowling around to bring up his fifty off just 24 balls.

The 40-year-old treated the opposition bowlers quite disdainfully, smashing five boundaries and six sixes to finish the match in just 18.2 overs.

Hafeez’s brutal 33-ball 73*overshadowed even Fakhar Zaman’s chanceless knock at the other end.

The left-handed opener was brilliant from start to finish and played some elegant shots of his own to finish unbeaten on 82 runs, which came off just 52 balls.

The 30-year-old Zaman carried his bat to lead the Lahore Qalandars to their second consecutive victory in the company of the experienced Hafeez.

For his composed knock, which included eight fours and two sixes, Fakhar Zaman was awarded the Man of the Match award in yesterday’s PSL match.

Shaheen Afridi, Mohammad Hafeez and Rashid Khan were the heroes as Lahore Qalandars registered a hard fought 4-wicket win over Peshawar Zalmi in the second match of the PSL 2021.

Karachi Kings’ title defence got off to a rollicking start as they crushed Quetta Gladiators by 7 wickets in the inaugural match of PSL 2021. It was Karachi’s biggest-ever win in terms of balls, as they chased down Quetta’s lowly score in just 13.5 overs.