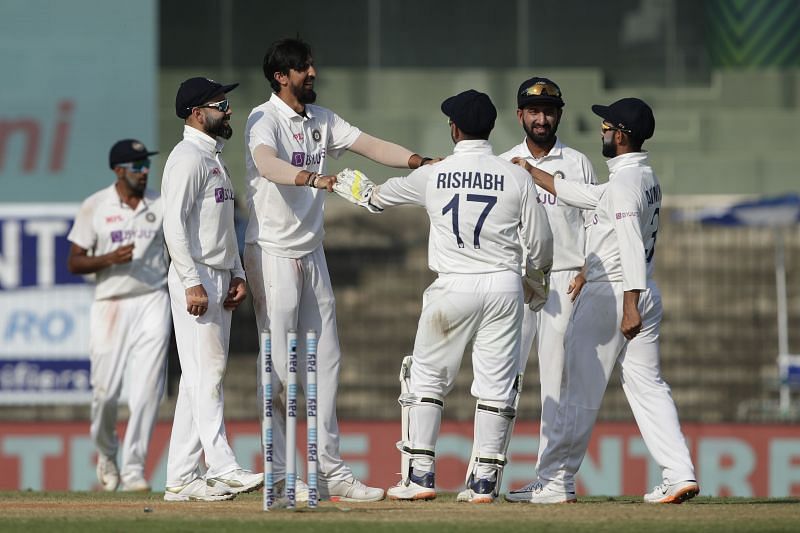 England would be disappointed with how the final session went. The lower order didn’t contribute much, as they slightly lost the plot after Joe Root’s dismissal. However, with Dominic Bess batting and the total past 550, England’s target of 600+ is well within reach.

India finally got the rub of the green, as they started the session with a couple of wickets. Ollie Pope was the first to go, as he played for the turn that never came and was caught LBW off Ashwin.

The mercurial Joe Root got out similarly, as he finally missed a ball directed at his stumps. Shahbaz Nadeem angled one in, and Joe Root reviewed thinking it’ll go down leg. But that wasn’t the case as Hawk-Eye showed 3 reds, and the England skipper walked back after a record-breaking double century.

The umpires have been spot on this match, but they, unfortunately, made an error in the final session. India thought they had Jos Buttler’s wicket after they appealed for a caught behind.

The umpire’s thought otherwise, with Washington Sundar down on his knees while pleading for the wicket. Replays proved India were correct, as Ultra Edge showed a spike. But with no reviews, Jos Buttler held his ground and survived.

But India finally got their man, with Ishant Sharma striking a double blow. Ishant’s discipline with his line and length was finally rewarded with the wickets of Archer and Buttler. Back-to-back balls pitched on good length and hit the off stump, with Ishant Sharma moving to 299 Test wickets.

Dominic Bess could have gone too, but Rohit Sharma dropped a sitter with Washington Sundar’s poor luck continuing. For a while, it looked like India would wrap things up.

However, Bess and Leach saw out the last 10 overs, adding 30 runs for the final wicket for England. With Dominic Bess looking comfortable, England will target a few more runs to give themselves the best chance on Day 3.

India will hope that the tail-enders don’t frustrate them too much. They will try and use the break to wrap up the tail quickly on Day 3, before beginning what should be a mammoth batting effort.

England were in complete control throughout the day and started on top with Ben Stokes and Joe Root. The all-rounder donned the aggressor’s role and played his shots freely all over the park.

The all-rounder was challenged by India’s spinners early on, as they targeted the rough around his off stump. But Stokes fought his way through the challenging phase, racing to his 50 in 73 balls before Lunch. With 3 sixes in his innings of 82, Stokes’ intent was clear throughout. But the same style prevented him from getting a century on his Test return, as he found Cheteshwar Pujara in the deep while attempting a slog sweep.

If Ben Stokes was aggressive, Joe Root was his usual self. He respected the good deliveries but dispatched the loose ones confidently as he racked up the runs. Root went past 150 before Lunch and crossed 200 with a sublime six off Ashwin post it, becoming the first batsman to score a double hundred in his 100th Test.

India’s bowlers didn’t go much wrong. Ishant and Bumrah ran in throughout, using their variations to keep England’s batsmen on their toes. Shahbaz Nadeem bowled better on Day 2, and Washington Sundar was unlucky to remain wicketless.

With the pitch not helping them, India had no option but to keep their spirits up. And Rishabh Pant was once again at the center of it, as he and Rohit Sharma gave fans some moments to remember with their theatrics on the field.