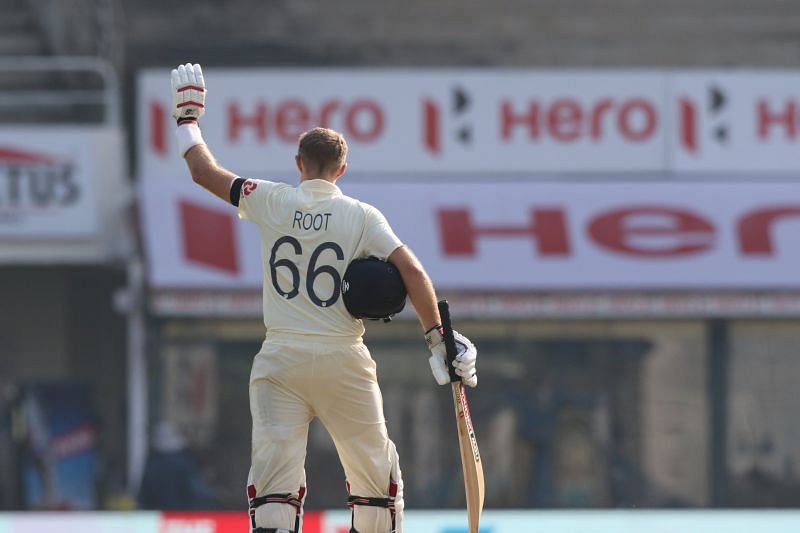 It was England’s day against India, where Joe Root led from the front. The England international marked his 100th Test with a ton. He was admirably supported by Dominic Sibley for the majority of the day, before he got dismissed by Jasprit Bumrah on what proved to be the last delivery of Day 1.

India have a mountain to climb on a pitch that isn’t doing much for the bowlers. They toiled hard, but India found it tough with the visitors targeting the inexperienced duo of Sundar and Nadeem. India ended the day on a positive note, and will now look to make further inroads on Day 2.

Some things are just meant to be… 💯

Some things are just meant to be… 💯

With the ball old and soft, England came in with a clear plan in the final session. After starting the first two sessions slowly, Root and Sibley were at their best post tea. The duo scored 123 runs, with England making full use of the foundation they set up in the afternoon.

Joe Root continued his stunning 2021 with another hundred. The England skipper relied heavily on the sweep shot and looks set for a big score in Chennai. Root came in after England lost consecutive wickets, and built up a 200 run stand with Sibley that took the game away from India.

If Joe Root had only scored runs with sweep shots this year, he would still be the 12th highest runscorer in Tests in 2021. #IndvEng

If Joe Root had only scored runs with sweep shots this year, he would still be the 12th highest runscorer in Tests in 2021. #IndvEng

He was visibly struggling in the latter stages with the Chennai humidity taking its toll, and Joe Root will now look to recuperate and pick up from where he left off on Day 2.

While Joe Root’s hundred was all about playing his strokes freely, Dominic Sibley on the other end was defiant in his stay at the crease. He batted for the whole day, and his patient knock was the fulcrum which allowed Root to flourish.

He would be disappointed after not getting a hundred despite facing 286 balls, as he couldn’t get bat to an in-swinging Bumrah yorker. Although Sibley reviewed the LBW call, DRS showed 3 reds and the opener went back for a well-made 87.

Although India got just 3 wickets on the first day, most of their bowlers performed well. The experienced trio of Jasprit Bumrah, Ishant Sharma and Ravichandran Ashwin was tight with their line and length with all 3 bowlers keeping the run-scoring in check. But the pitch didn’t offer any movement for the pacers, and Ashwin couldn’t extract much turn off the wicket as well.

Ishant Sharma held up well after returning from injury. He troubled Root early on and got the ball to reverse, but wasn’t rewarded for his efforts. Jasprit Bumrah was his usual self and got 2 wickets in his first home Test for India.

Shahbaz Nadeem and Washington Sundar were the weak links in India’s bowling attack. Nadeem bowled too short, while Sundar struggled to get any turn and was duly targeted by England. They will have to step up if India want to restrict England under 400. The duo was the most expensive out of the lot and was guilty of relieving the pressure the top 3 bowlers built up for India.

England have done well to score 263 on Day 1. They saw off the first session, settled in the second and attacked in the 3rd. With Root at the crease and Buttler and Stokes to come, the visitors will aim to get upwards of 500 in the 1st innings.

India on the other hand will have to come up with new plans if they want to get more wickets. They’ll target Joe Root’s scalp on the morning of Day 2, and will hope the surface offers better assistance to their 3-pronged spin attack.

Earlier in the day, England showed great resolve to compose themselves after a tough period. They started the 1st innings confidently, with Dom Sibley and Rory Burns becoming the first pair to score a 50+ partnership vs India in India since March 2017.

First 50+ opening partnership by a visiting team vs India in India since Warner & Renshaw put together 50 in Ranchi, Mar 2017.#INDvENG

First 50+ opening partnership by a visiting team vs India in India since Warner & Renshaw put together 50 in Ranchi, Mar 2017.#INDvENG

Just when the duo looked set to kick on, a brain fade from Rory Burns sent him packing. The opener played an unnecessary reverse sweep, and India got their breakthrough with a soft dismissal.

63/1 became 63/2 as Jasprit Bumrah trapped Dan Lawrence LBW to claim his maiden Test wicket at home. But the arrival of Joe Root coincided with England’s revival. Sibley and Root dug their heels in and saw out periods of disciplined bowling from Ashwin, Bumrah and Ishant either side of Lunch.

After Shahbaz Nadeem and Washington Sundar came into the attack, England eased up and started scoring freely. The pattern continued until tea, as Dom Sibley reached his half-century with the scoreboard reading 140/2.

England made full use of the conditions, as they saw off the second session without losing a wicket. Dom Sibley scored his fourth Test fifty, with Joe Root also making a solid start on Day 1.

Joe Root gave a crucial fitness update after suffering cramps at the end of Day 1. The England skipper also thanked Virat Kohli for helping him stretch on the field.

Joe Root feels England need to make the most of their good start on Day 2, after reaching stumps on the first day on the ascendancy. The England skipper hopes to see his team score a big first-innings total and then use the deteriorating pitch to their advantage.