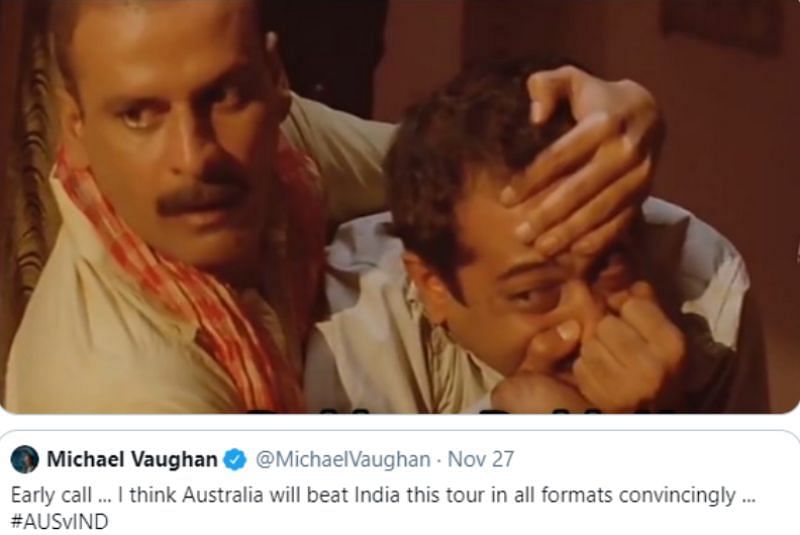 Early call … I think Australia will beat India this tour in all formats convincingly,’ Vaughan had tweeted on November 27 after India’s loss in the first ODI.

Following India’s six-wicket triumph against Australia at Sydney in the second T20I on Sunday, Wasim Jaffer took a no holds barred dig at Vaughan with a funny meme. Check it out below.

Here are some interesting Twitter reactions to Wasim Jaffer’s meme:

thats how Wasim bhai was waiting to tweet this meme pic.twitter.com/0NTokCY1x4

thats how Wasim bhai was waiting to tweet this meme pic.twitter.com/0NTokCY1x4

Rather use this template sir😂😹 🙏 pic.twitter.com/bhO6wNK1Eu

Rather use this template sir😂😹 🙏 pic.twitter.com/bhO6wNK1Eu

Memers around the world ! 😄 pic.twitter.com/xsQ7f1k1Kx

Memers around the world ! 😄 pic.twitter.com/xsQ7f1k1Kx

India chased down a challenging 195 in the second T20I against Australia at Sydney to clinch the three-match series 2-0.

With 14 needed to win off the last over, Hardik Pandya launched two length balls from debutant Daniel Sams over the ropes to see India home by six wickets.

Despite not timing the ball well for the most part of his innings, Pandya held his nerve and finished unbeaten on a brilliant 42 from 22 balls.

Apart from Pandya, Shikhar Dhawan (52), Virat Kohli (40) and KL Rahul (30) also made crucial contributions. With the ball, left-arm seamer Natarajan stood out with figures of 2 for 20.

For Australia, stand-in skipper Matthew Wade (58 from 32) played a scintillating knock opening the innings. Wade smashed 10 fours and one six in his knock before being dismissed in bizarre fashion.

Wade chipped a ball from Washington Sundar to Kohli at cover. It was a simple catch that the Indian skipper inexplicably dropped. However, Wade had already set off for a run which Steve Smith denied.

Kohli recovered in time to send a throw in to wicket-keeper KL Rahul and catch Wade short of his ground.

Smith went on to score 46 from 38 balls while quick 20s from Glenn Maxwell and Moises Henriques took Australia past 190. It wasn’t to be enough though as India’s batting might was too much for Australia eventually.

The third T20I between the two sides will be played at the SCG on December 8.

The Indian cricket team suffered an 8-wicket loss to Australia in the pink-ball Test. The visitors will try to get back to winning ways at MCG. Former Indian batsman Wasim Jaffer sent a hidden message to the team management before the Boxing Day Test.

Former India opener and domestic legend Wasim Jaffer was definitely unlucky not to have played more than 31 Test for India. With Virender Sehwag and Gautam Gambhir making the opening slot their own, Wasim Jaffer kept waiting in the wings — a never-ending one until the latter realised there was no hope.

The ICC awards for the decade were announced on Sunday. Along with the teams for the Test and ODI formats, players in the T20I team of the decade was also revealed.

Former Indian opener Wasim Jaffer lavished praise on Shubman Gill, who impressed with his batting in the 2nd innings of the second warm-up encounter against Australia A. Gill went on to score a high quality 65 laced with ten boundaries.