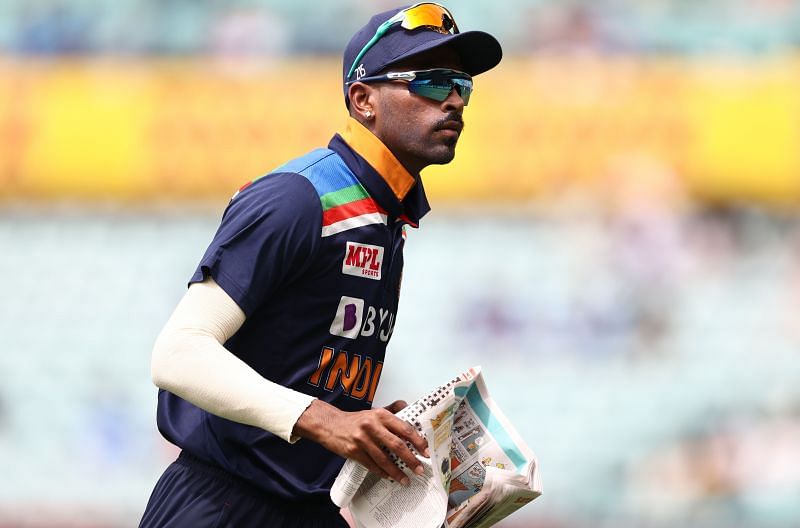 Team India’s in-form all-rounder, Hardik Pandya, said on Sunday that he wouldn’t mind staying back for the upcoming Test series. Pandya, who has been in terrific form with the bat since the start of the ODI series, helped India to a T20I series victory yesterday.

Hardik Pandya, who is yet to start bowling at full stretch, has been backed by many for his inclusion into the Test side based on his red-hot batting form. The all-rounder spoke at the press conference post the 2nd T20I and said:

“It’s a different ball game, I think I need to be, I mean I don’t mind but at the end of the day, the call is on the management. So, yeah, I don’t think I can say much about it.” Hardik Pandya on aspirations of staying back for Tests

Hardik Pandya was also a vital cog in Mumbai Indians’ triumphant IPL season earlier this year, and, has carried that form into the national side. The all-rounder revealed that he was working on finishing games during the lockdown.

“During lockdown I wanted to focus on finishing games where it matters the most. It doesn’t matter whether I score or don’t score more runs,” Hardik Pandya said at the post-match press conference

The all-rounder said that he was not new to situations like those on Sunday. Hardik Pandya mentioned that he tries to remember the times when he has chased big totals and that it helps him during such situations.

“I have been in these situations many times and I learnt from my mistakes in the past. My game is always around the confidence which I carry, it has that fine line where I back myself and not become overconfident. I always remember all those times when we chased big totals and it helps,” Hardik Pandya said.

Hardik Pandya, who hit two sixes in the last over to seal the victory for India in the 2nd T20I, said, he tries to focus on things what he can do.

“It was not about what they are doing, it was about what I can do. It’s a matter of two big shots and today it came off. I always back myself. It’s the situation I have always played. Whatever the team requires I always try to do. It’s very simple. I like to look at scoreboard and play so that I know which bowlers to target,” Pandya said.

This one is for everyone back home! 🇮🇳 pic.twitter.com/nXsF7fS9PJ

This one is for everyone back home! 🇮🇳 pic.twitter.com/nXsF7fS9PJ

Hardik Pandya told reporters that he always tries to break down situations and focuses on the process rather than on the results. India will look to whitewash the series 3-0 as they gear up to face Australia in the 3rd T20I at Sydney tomorrow. The match starts at 1:40 PM.

Former Indian captain Virender Sehwag has opined that Hardik Pandya is currently the best player in the world at the position he bats at in white-ball cricket.

Former Indian captain Virender Sehwag believes that there is a possibility that Hardik Pandya might have opted out of the Test series against Australia.