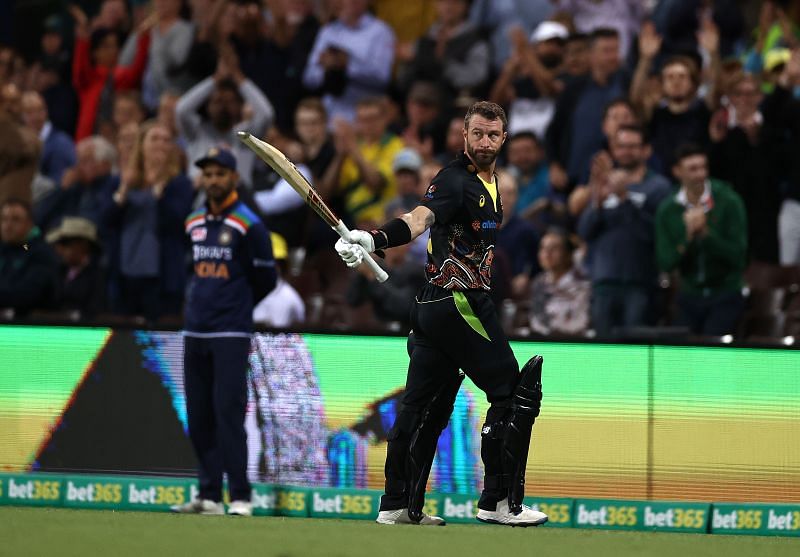 The southpaw received an opportunity to open the innings after captain Aaron Finch picked up a niggle in the first T20I. The team management backed Matthew Wade and the player was made the skipper of the team.

Wade promoted himself up the order and opened the innings with D’Arcy Short. The 32-year-old from Hobart registered two consecutive half-centuries, cementing his spot in the Australian cricket team.

🇦🇺 Matthew Wade’s 32-ball 5️⃣8️⃣ against India was just his second in T20I cricket, while it was also his second-highest score in the format ✨

Can the Aussie lead his side to victory in the third and final #AUSvIND T20I in Sydney on Tuesday? pic.twitter.com/4JSRVAz7qa

🇦🇺 Matthew Wade’s 32-ball 5️⃣8️⃣ against India was just his second in T20I cricket, while it was also his second-highest score in the format ✨

Can the Aussie lead his side to victory in the third and final #AUSvIND T20I in Sydney on Tuesday? pic.twitter.com/4JSRVAz7qa

In the second T20I against India, Matthew Wade blasted 58 runs off 32 deliveries before losing his wicket in an unlucky manner. He continued his magnificent form at the Sydney Cricket Ground, scoring 80 runs from 53 balls in the third T20I.

Wade broke his own record for the highest score by an Australian wicket-keeper in T20Is and powered his team to a memorable win in the final game of the series.

While the Tasmanian cricketer has represented Australia regularly, he could not make it big in the Indian Premier League. Many Indian fans were wonder if Matthew Wade ever received an IPL contract in his T20 career. The answer to the question: Yes.

‘Not quick enough, I’m not Dhoni’

Matthew Wade almost pulls off a magic bit of keeping but Dhawan gets his foot down just in time #AUSvIND pic.twitter.com/6h4xZBbUot

‘Not quick enough, I’m not Dhoni’

Matthew Wade almost pulls off a magic bit of keeping but Dhawan gets his foot down just in time #AUSvIND pic.twitter.com/6h4xZBbUot

A mega-auction took before the fourth IPL season in 2011 as two new teams joined the league, and there was a massive demand for the wicket-keepers. The Delhi Capitals (then known as Delhi Daredevils) signed Matthew Wade for 46 lakhs in the IPL auction.

The Delhi-based franchise gave him three opportunities to showcase his talent. However, Wade could score only 22 runs at a strike rate of 66.67. The Delhi released him and no franchise invested in his services after 2011.

With two new teams rumored to join IPL in 2021, the chances of another mega-auction are very high. It will be intriguing to see if Matthew Wade can get a bid or two in the upcoming IPL auction.

Michael Hussey and Shane Warne believe that Matthew Wade’s Australia career could be in jeopardy after another poor display with the bat against India.