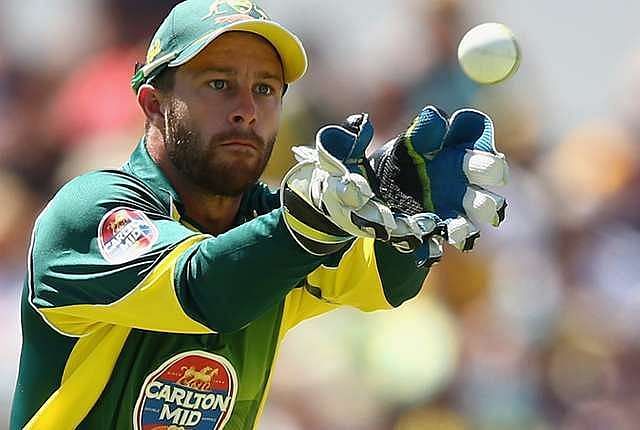 Dhawan was batting on 39 and tried to cut a wrong’un from the spinner. He missed the wide delivery but temporarily lifted his foot off the ground. Matthew Wade spotted an opportunity and whipped off the bails.

The replays, however, showed that Dhawan had got his foot down back in time, and the left-handed batsman was adjudged not out. As the umpire signalled a wide, Matthew Wade made a tongue-in-cheek statement that was caught on the stump mic.

‘No Dhoni. Not quick enough like Dhoni,’ joked Matthew Wade, taking a dig at himself.

To add to the hilarity of the situation, Dhawan, who went on to complete a fifty, was heard responding to him with a firm ‘No’ followed by a wry smile.

India’s retired wicket-keeper batsman and former skipper MS Dhoni was regarded as one of the quickest in the business when it came to effecting stumpings and run outs, especially in the limited-overs formats.

Although Matthew Wade may have failed in his attempt to stump Dhawan, the stand-in skipper had excelled with the bat earlier in the day.

Coming in as stand-in skipper for the injured Aaron Finch, Matthew Wade (58 from 32) led from the front for Australia as the hosts posted 194 for 5 in the second T20I at Sydney.

Sent into bat after losing the toss, Australia motored along to 59 for 1 at the end of the powerplay thanks to Matthew Wade’s crisp strokeplay, despite losing the out-of-sorts D’Arcy Short for 9.

They have now won 1️⃣0️⃣ T20Is on the trot, including two Super Overs 👏 #AUSvIND pic.twitter.com/B4ZW1MQUdx

They have now won 1️⃣0️⃣ T20Is on the trot, including two Super Overs 👏 #AUSvIND pic.twitter.com/B4ZW1MQUdx

The Aussie wicket-keeper batsman waltzed to his fifty in just 25 balls. Wade was eventually dismissed thanks to a bizarre run-out.

The left-hander’s knock went in vain though as Hardik Pandya’s scintillating 42 not out off 22 balls saw India clinch the match by six wickets, and with it, the three-match T20I series as well.