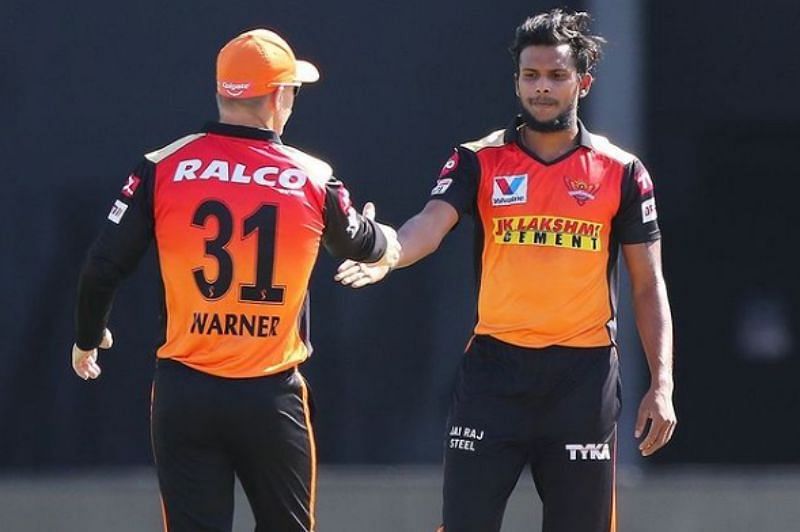 T. Natarajan finished as the leading wicket-taker in the three-match T20I series against Australia with six scalps as India won the series 2-1.

Warner, who captains the left-arm pacer at the IPL franchise Sunrisers Hyderabad, was lavish in his praise of T. Natarajan.

“Win lose or draw we respect each other on and off the field. Despite losing the series I couldn’t not be any happier for this guy @natarajan_jayaprakash such a nice guy and just loves the game so much. From being on the tour as a net bowler to debuting ODI/T20i for India what an achievement buddy well done!!”

T. Natarajan was chosen in the Indian team following his impressive performances in IPL 2020. He picked up 16 wickets in as many matches at a strike rate of 23.56. Apart from his wicket-taking ability, his accurate yorkers also caught the attention of many. He famously cleaned up AB de Villiers with one during the Eliminator against RCB.

The latest addition to Indian cricket’s rags to riches saga, T. Natarajan was born in Chinnappampatti, a village near Salem in Tamil Nadu. His father was a sari weaver who earned Rs 1,500 a week, according to some reports.

From being a net bowler to impressing the whole nation in his debut series, @Natarajan_91 has surely come a far way 🙌🏽

From being a net bowler to impressing the whole nation in his debut series, @Natarajan_91 has surely come a far way 🙌🏽

His mother sold chicken in a tiny shop in their village and used to earn Rs 300 a day. The oldest of five children, T. Natarajan had lived in a small rented place with his family. The 29-year-old saw poverty from close quarters as they struggled for basic necessities like food and money.

T. Natarajan’s fortunes took a drastic turn when, in February 2017, he was purchased by Kings XI Punjab for Rs 3 crore at the IPL auction. He was later picked up by Sunrisers Hyderabad, his current franchise.

T Natarajan has been added to India’s T20 squad for the upcoming series against Australia after Varun Chakravarthy was ruled out with a shoulder injury. His maiden call-up comes on the back of an impressive Indian Premier League campaign with the Sunrisers Hyderabad, which saw him pick up 16 wickets in the tournament at an economy rate of 8.02.